Today is the 40th Anniversary of John Lennon’s murder.  Just like when JFK was assassinated I (and probably many of you) remember exactly where you were when you the news that evening that John Lennon was dead.  It was unfathomable – why?  But ‘why’ isn’t able to always be answered in matters like this – as in a lot of other matters in life.

I had one ‘direct’ experience with John.

It was about 1972 or 1973 and I was hanging out in Jersey City, NJ with Tommy and Freddy, old bandmates from the group ‘Everyone.’  It was either a late Sunday afternoon or early evening.  We were driving around in my car listening to John Lennon being interviewed on an FM radio station in NY.  We just figured it had been previously taped.  Then, something was said – we knew it was live – happening right then!

I turned the car around and we headed to the Holland Tunnel – that connects New Jersey with Lower Manhattan.  We knew the building that the radio station had its studio, on Sixth Avenue around 50th street.  There was hardly any traffic and we made great time.

Of course, we listened to the interview in the car, hoping that it wasn’t going to end before we got there.  We got to the building.  The streets were amazingly quiet for NY and I pulled around the corner and parked – legally or illegally we didn’t care.  We were sitting in the car, windows open, just watching the front entrance of the building.  We saw a limo parked on 6th Avenue and we were pretty sure it was waiting for John and Yoko.

Not long after we got there, sure enough John, Yoko and Dave Herman, the DJ, walk out of the building.  John, long beard and his famous white suit, just strolling out of the building without a care in the world and going down the stairs to the street.  It was amazing – we were literally the only people around!

As they got closer to the limo I jumped out of the car and went to stand on the street pretty close to the limo.  As they slowly started moving up 6th Avenue, I stepped to the corner and held out my thumb, as in hitch-hiking.  Lennon rolled down his window and with a smile flashed me the peace sign.  It was something I’ll never forget.

My former bandmates actually got to meet John at a club on the Upper East Side called ‘Home’ where they played periodically hoping to be discovered.  I sat in with them from time to time as they had not replaced me on keyboards. But those nights that I sat in John was not there. 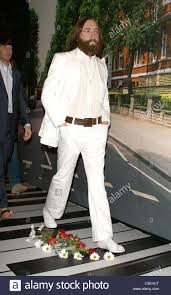