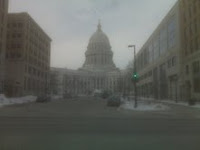 This past week was truly an “On the Road” one. I’ve been traveling with my colleagues Ed Casal and Russ Bates visiting anyone who’ll take a meeting with us (not really but sort of). We went through several climate changes (Chicago, IL; Madison, WI; San Francisco and Sacramento, CA) and it was nice to lose our winter coats in the unseasonably warm CA winter yesterday and today.

Everywhere we went things were slow: restaurant business down, restaurants closing, hotel business down, flights typically full now had space and noticeably less traffic on roads during rush hours. We are in bad times people and they seem to be getting worse. Most folks, even the wealthy are worried and watching their spending and believing and acting more like ‘Cash is King.’

I’m meeting with a broker tomorrow in Napa, CA to see what the market is like to sell my house there. I’ll let you know how it comes out as it may be a good microcosm, at least of that market. But I suspect that in general if you are not forced to sell, don’t. It’s the same thing with institutional LP interests. Until 4Q08 valuations are in we won’t know the full extent of the distress in the LP community in terms of their need to sell their interests. Right now it appears that the same phenomenon that impacted the commercial real estate transaction world (i.e. inability to match expectations of buyers and sellers) will also be a force in the secondary market but we’ll have to wait and see. “Rescue Capital” (as Bret Wilkerson, head of PPR is fond of calling it) is being raised to take advantage of opportunities that are likely to present themselves. Some people will need a life-preserver to save their deals, funds, etc. and but some may need a Coast Guard cutter. Anyway, this type of capital is likely to be very popular. But again, a lot of this stuff is evolving just now and we’ll have to wait a little longer to see exactly how it plays itself out.

My father, who turns 92 on May 1 was the crew chief (for a crew of two) that brought a captured Japanese WWII plane back to the U.S. from the Pacific on a ship and then he and a pilot were given the assignment to fly that plane to Washington, DC. It was supposed to take three days but it took two weeks including a side trip so the pilot could have lunch with his parents, waiting out a hurricane, repairing a faulty oil gauge and my father getting his parachute on when the engine conked out and went into a dive (until they found the lever that opened the auxiliary gas tank). It’s a story that he has told many times and it was definitely one of the signature experiences in his life. I don’t know why I waited this long but a couple of months ago I emailed the Smithsonian, told them the story and asked them if by any chance they knew of the whereabouts of this plane. Shortly I received an email back saying, “We have that plane!” I couldn’t believe it but more than that my Dad really couldn’t. This past Wednesday I met my father and his wife in Washington and took them to a remote Smithsonian warehouse where Al Bachmeier, a 37-year museum veteran took us to see the plane. Although using a wheelchair fairly often now and not too mobile any longer my father climbed up a ladder on three separate occasions to have a closer look into the cockpit where he and the pilot shared this amazing excursion. I have to tell you how small this plane was and thinking of them flying across the country, well, it’s pretty unbelievable. After we confirmed that this was the actual plane and my father provided some color commentary, Al was kind enough to show us around another big building where they restore all kinds of aircraft. He and my Dad talked non-stop about aircraft, engines, etc. Al said that he’s had a number of WWII vets come down and he has learned a lot from their personal recollections. The following day they went to the Steven F. Udvar-Hazy Center Air and Space Museum near Dulles airport. I had been there for a client dinner a few years back and if you are into flight you need to go there.

I guess the reason I’m sharing this with you is that it’s incredible what we are able to do if we just try and believe we can. Taking a wild shot at finding that plane and getting lucky to have a cooperative person on the other end not only reply but forward the email to the right guy…well, it was very special. To be part of my fathers’ experience made me feel really good and I guess now I think about how truly little effort it took me and what ‘priceless’ results it had. All it meant was taking some time to do something for someone else. In a world going madder by the day maybe turning more inside and appreciating what we have instead of being angry about what we don’t have is the key to some peace of mind. Helping others is also healthy. Life is made up of lots of little experiences, some planned, some chance. Grabbing on to them as they present themselves can make all the difference in the world to you and to others.


These are my personal views and not that of my employer.
Posted by Steve Felix at 6:00 PM 1 comment: