Inspiration can come from unexpected places.  There’s a young man (26) working at a hotel in Florida that I stayed in the past few days.  When I checked in, he was behind the desk and I could tell he was in training.  He was very friendly and did an excellent job (especially because I was checking in early and he was able to find me a room!).  Then, the following morning while waiting in the lobby to hitch a ride to the Hoyt Fellows meeting from someone who had a car, I talked with KC.  He’s from Malaysia.  He came to the U.S. five years ago.  In Malaysia he worked at a TV station, writing stories that were delivered by on-air newscasters.  But he had dreams.  He moved to Florida because he has a cousin here.  Last summer he worked at a bed and breakfast in Maine and fell in love with the area and with that business.  His plan, note I use the word plan vs. dream, is to own his own B&B, probably in New England.  I know he’s going to do it.  Listening to him reminded me that we can achieve anything we set our mind to.  It’s easy to fall into a pattern of acceptance about your life, your work, etc.  It takes courage to make changes and do something different.  There is always fear of failing and there is also fear of success.  My random meeting with KC is just one of those serendipitous things in life…why they happen I have no idea but that these types of encounters happen is what makes life both mysterious and joyous.  I gave him my card and asked him to let me know when he opens his own B&B. I know he will!

This week I had a chance to see my first baseball game at Progressive Field in Cleveland, Ohio thanks to my friends at The Townsend Group.  It’s a beautiful ballpark and I’m sure the threat of thunderstorms kept away some of the crowd.  But, in the bottom of the ninth, Cleveland scored the winning run when the opposing pitcher issued a walk with the bases loaded.   But sitting in that stadium and listening to one of the bleacherites bang the drum to get the fans going reminded me of one of the best sports films I’ve ever seen called “Major League.”  Anyway, thanks guys.  I had a great time.
I’m writing to you from North Palm Beach, Florida where yesterday I attended the annual meeting of the Hoyt Fellows.  Today the program of the Weimer School of Advanced Studies in Real Estate and Land Economics continues. Hoyt Fellows includes some of the brightest minds in the commercial/institutional real estate world.  Its membership is mostly academics but they’ve allowed a few guys like me to infiltrate their ranks. There's a great team at the Hoyt Institute Maury Seldin, Hal Smith, Ron Donohue, Ron Racster, Bobbi Bernardini and Carol Reynolds.   When looking at the roster, I guess I didn’t realize how many of these folks are Ph.D.’s.  It’s an impressive group and I am humbled in their presence.  They are deep thinkers about commercial real estate and the dialogue at these meetings is open and refreshing.
I took some pretty good notes from these sessions and am happy to share them with you.  Just send me an email with the word "Hoyt" to me (steve@simplicate.com).
Logan update:  Last fall back I wrote to you about one of my good friends’ grandson Logan who was going through a very, very tough medical situation.  I got an update this week and wanted to share it with you.  Logan has a chromosomal defect known as hypo diploid, which means he has less than the number of chromosomes with full genetic composition that normal humans should have. This complicates his leukemia and worsens his prognosis. Logan’s case is rare.   Logan’s family asked me to extend another big ‘thank you’ to those who generously donated to help them through this difficult (and costly) experience and for those who prayed for Logan.
Logan is improving by the day. He has a portable feeding tube, required after his weight had dropped to under 30Lbs. due to a lack of appetite from the meds and chemo treatments. He's been a real trooper about the tube and has begun to eat up a storm on his own as the meds are reduced. I spent some time with him over the last weekend and he's back to laughing at my silly jokes and jumping on me for fun...things he has not had any energy for over the past several months! He is slowly returning to his old loveable self and his weight is up to almost 35 lbs. in a couple of weeks.
Logan is four years old.  (http://www.facebook.com/LoveforLogan?sk=wall)
Final note:  I found this card that was left on the pillow of a hotel room I stayed in some months back.  It's titled "Clarity."
Dear Guest,
Before going to bed, clear your mind by writing down your thoughts and feelings on paper.  This exercise is a healthy outlet for letting go of daily pressures in life.
Wishing you pleasant dreams and a good night.
Signed,
Minnette
Your room attendant
After reading this I started sleeping with a pen and notepad on the night table.  I remember reading once that it's a good idea to have those materials handy for when you wake up in the middle of the night...you're supposed to write down whatever you're thinking about that woke you up and then go peacefully back to sleep.  I haven't used the pad and paper yet and, believe me, there are many nights that I wake up thinking about things but instead of clearing my head and then falling back to sleep, I get up (Some of you have received emails from me at odd times, although sometimes I don't even know what time zone I'm in and now you know the reason).  But finding the card is another reminder of a good tool that I believe comes from a Zen source.
Congratulations to friends:
Doug Harper who joined Principal Real Estate Investors.
Joe Valente who joined JPMorgan Asset Management
Anatole Pevnev who launched Ten Capital Management
Jeff Havsy who joined NCREIF
Asieh Mansour who joined CBRE
On the road....
May 16-17: New York
May 18-27:  West Coast
June 1-2: New York to moderate a panel at IMN's Opportunity and Private Funds Forum
June 6-10: London to moderate a panel at the PERE Forum-Europe

Photo:  Friendly looking zebra at the San Diego Zoo but they're supposed to be pretty ornery creatures. 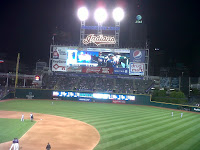 Photo:  Progressive Field, Cleveland, OH on Monday night.
These are my views and not that of my employer.
Posted by Steve Felix at 1:55 PM No comments: