RCA Briefing Note:  As overall sales volume slowed sharply in Q3, foreign investors were bucking the trend by continuing to expand their acquisitions of US commercial real estate. With Asian and Latin American capital growing at the fastest rate, cross-border investment should top $5.0 billion in Q3 for the first time in four years and account for over 10% of market activity.
Sad news.  Wayne King of The Goldstein Group in New Jersey passed away at 52, another victim of cancer.  Wayne was the second employee at CREOL (Commercial Real Estate Online) which was one of those ahead of the times Internet ideas that didn't make it.  I worked with Wayne.  He was the architect that took Steve Oder's vision and made it real.  Wayne was a bright, interesting and just plain nice guy who had a heart.  I hate this cancer crap!
I spent time last weekend with my son, his wife and their two sons-yes, my grandsons, Sean (2+) and Gavin (one month) in their home in Asheville, NC.   A busy house to be sure!  Hanging out with Sean I was reminded about how kids find such simple ways of entertaining themselves, being entertained and entertaining us.  Things we take for granted, the trees swaying in the wind, the fog that appears on a window when you breath on it, running around and diving onto a couch, banging on a drum, laughing at silly words that your Grandpa teaches you (i.e.  Pizza Juice), listening to The Beatles while in the car seat of your Daddy's car.  It's wonderful to see and served as a great reminder to me about how there are so many simple things in life that we just take for granted, or overlook or, don't have time for.  It's these simple things, most of them with no cost involved, that can give us pleasure every day if we just take a minute to appreciate them.  Btw, Asheville is very cool.  It's like a time warp in some ways back to the late 60's/early 70's.  It's a college town with a vibrant restaurant, shopping and music scene.  There's also a lot of 'real green' (trees) in and around that beautiful part of America.
Dig This!
The world's first Heavy Equipment Playground:  Where you can relive your childhood sandbox days.   It's in Las Vegas, not far from the Strip and this week I had a chance to experience it for myself.  It's the kind of thing that you will keep telling people about.  It's fun by yourself (but more fun with a group) and it's run in a first-class and extremely safe way.  Some participants were on the bulldozers and I was on an excavator (see below).  It's a really cool thing to do and this is the only place in the world (for now) where you can do it.  It's attracted people of all shapes, sizes, ages and genders and is the #1 attraction/thing to do in Las Vegas on Tripadvisor.com.  I met a couple of guys whose wives gave it to them as a birthday present.  It's also a perfect venue for 'team building.' Special Offer:  Because I have a connection with the ownership of Dig This, they have authorized me to offer a 25% discount to anyone who mentions my name when they make their reservation. 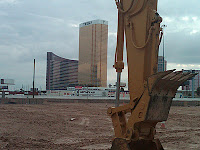 Dig This site:  I drove this heavy machine (there's a better picture here).  Didn't do as well as the other two drivers but I had tons (140,000 pounds worth) of fun.
I heard some very good stuff this week from a very interesting speaker but I want to take some time to digest what she said before I share my takeaways with you....next week.
"A legendary hero is usually the founder of something-the founder of a new age, the founder of a new religion, the founder of a new city, the founder of a new way of life.  In order to found something new, one has to leave the old and go on a quest of the seed idea, a germinal idea that will have the potential of bringing forth that new thing."  Joseph Campbell, Hero with a Thousand Faces.

Steve Jobs:  he had a vision that was right on as far as what the world wanted/needed and how Apple could fill that need.  But identifying a customer need isn't what Jobs was all about; he created a need but having not just his fingers but his whole being on the pulse of the future.  He figured out who his customers were and what they wanted.  There have been some folks, in our lifetime and throughout history, who have had the same 'seventh sense' and perhaps it's because Jobs made his mark in an era of unprecedented media coverage and Internet connectivity, that he's achieved the status that society is putting on him.    Originally, Mac users were a cult; going against the grain of the PC.  They did 'think different' and now there are many of us who are using Mac's and other Apple products and it seems like more and more are adopting them.  PC use is still in the majority...particularly as companies, for the most part, use them.  But from a personal perspective, how many of us use a PC and related peripherals for work and an iPhone, iPad, Nano (is that still the current thing for music or are people just using their iPhones for everything) for everything else?  At a time when the world needs more heros, Steve Jobs will go down as one of them.


Congratulations to my friends, Joan Matera who has joined JPMorgan as a Senior Credit Banker in their Real Estate Banking Group and Hugh MacDonnell who has joined Clarion Partners as a Managing Director in their Capital Raising group.


These are my views and not that of my employer.  This column is written on a MacBook.
Posted by Steve Felix at 6:57 AM 1 comment: