Last week's column generated a good number of responses about the resume thing. I thought I'd share some with you given that there seem to be two distinct camps on this:

-I like a resume that somehow tells me something special about that person. I think this can also be useful to the interviewers because it gives them an interesting and non-threatening way to begin the interview.

-It doesn’t really make a difference, though I think it serves to remind the interviewer that the candidate really doesn’t have much experience and is using his or her “life experience” to fill white space. However, since jobs are like needles in haystacks these days, perhaps you might be sitting across the desk from the one CFO in America who is also a salsa dancer.

-I agree with you; total rubbish and should not be on a resume. If a person to person interview goes so well that a potential employer wants to know more about you, fine. But not on the resume.

-These interests are risky to state. I am not sure that I want to hire a guy with an 8 handicap. I know where he will be every minute he/she can.Every once in a while it maybe handy but the risks are not worth it.

-Yes, MBA career services instruct candidates to put these kinds of interests on their resume. The belief is that it will show a recruiter that the interviewee is not an MBA automaton that can just crunch numbers and make Excel models. I list two interests at the bottom of my CV and they have come up in interviews to help break the ice and to create a relationship beyond just job function. I’m interested in hearing what others think as some of these examples are too extreme in my opinion.

-My Uncle Bill said never hire a guy with a single digit handicap, he will be spending too much time on the golf course.

-50/50 on the interests, could help, could hurt, wouldn't use unless I had deep inside background (rare) of who I would be talking too.

-It was suggested by my career adviser in grad school (advice i chose not to take) as it could create something "non-work" to discuss at the interview to explore how personalities and interests mesh, beyond someone's skills and experience related directly to the job. But it is risky at the same time.

-Including outside interests has become the norm because it shows that candidates are well rounded, have interests outside of their day to day job and shows dedication or discipline in other activities that may or may not help them in the workplace. At least with my experience it can be a talking point to break the ice which can help get the conversation for an interview off to a solid start. Many of your top organizations like to see that candidates include this and you never know if may be something that sets you apart from an already competitive group of candidates. I have never heard of it doing harm as long as it's not political, gender or race specific which I would hope is just common sense for folks.

-I think this "Interests" thing in the resumes is a good thing, puts more of human dimension on these candidates, perhaps making for some good conversation or an ice breaker

- I have hired and fired a lot of people in my time and I have to say that I’ve found that this section offers a more telling glimpse into the “person” that you are hiring more than a lot of other things on their resume. We all want to hire the best person for the job and often times I’ve found that you can get a really good idea about the person’s work habits and how they will blend with your corporate culture by understanding what it is that they do with their free time. In talking about these types of things in the interview setting, I have often found that it’s a lot easier to get them to relax and build a rapport with them which in turn creates a setting in which they feel that they can act more naturally vs giving a typical interview performance. At the end of the day, a good interviewer needs to understand psychology.

-The only "interests" we screen for are those that "give back" to the community. Might be teaching; mentoring; acting as a docent; language/translation services for the infirm, etc. Beyond that, we don't care - but if it seems to be a "commercial" activity that could compete with or replace the interest in our business, it might be considered a negative. On balance, I agree with you - that stuff is better saved for a personal interview when there is a direct engagement between people.

-I find that these 'interests' are all a little bit over the top and scream of egoism (just my opinion). Not impressed. Maybe I am missing something, but this is coming from an entrepreneur. Candidates are there as part of a competitive process to land a job and join a team. Performance, awards and achievements speak to me more than interests, unless it is on a Linkedin profile.

-Generally, in my opinion, the placement of Interests at the bottom of a resume is a good thing. Fit is a difficult component to gauge and having some added insight into the person behind the facts typically serves to enlighten a reader. One word of caution: frivolous items such as "people watching" "exploration of cultures" can work against the message of being focused and action oriented.

-In answer to your question about “Interests” on a resume. It is mildly entertaining and might spark a brief discussion, but it would have extremely minimal bearing on the hiring decision. In fact, it could detract. If a guy maintains an “8” handicap in golf, I’m think he’s golfing more than he’s working!

-I believe that commanalities secure business relationships, establish trust and as much as I loath to admit it people invariably trust those that are most similar to them. I think personal interests are ever more important, especially in an environment where there is little to differentiate those with school and qualifications.

Someone mentioned to me that it might be more of a generational thing.  Given that many people of certain age groups are exposing themselves on various social networking sites, and that these sites are more and more being accessed by everyone from a potential employer to a potential date to a potential borrower the mention of interests and hobbies in a resume may just be a non-event.  Anyway, thanks to everyone who wrote to me on this.  I appreciate hearing from you. 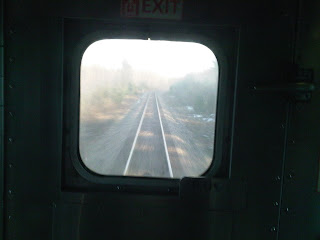 Photo:  Looking out the back of the Amtrak train from New York to Montreal yesterday.

These are my views and not that of my employer.
Posted by Steve Felix at 1:07 PM No comments: