There's a difference between diplomacy and politics. Others have told me that I'm diplomatic so let's assume that I am.  Some people are good at playing politics. I'm not talking about professional politicians although some of the folks I'm thinking of while writing this may have attended a Politics at Work Seminar at one point or another.  I've never been good at politics at work and when dealing with the pol pros sometimes, actually most times, I've lost out.  Not too bright of me you may be saying. A light bulb, or better a warning alarm accompanied by a police flashing red light should go off to alert me. But the idea of game playing just always been something I can't and won't do.  Listen, I try not to shoot myself in the foot anymore like I did earlier in my career and the way I do that is by biting my tongue instead of flapping it.  I've realized that not everything I think or say is right (only most of it :-) But to me that then gets into the realm of diplomacy (can you say 'keep your job'?) So maybe, after many years in this great industry and working in so many different environments (entrepreneurial, family-controlled, big, public, start-up) I've been exposed to lots of dynamics and yes, office politics.  But things are not going to change just because I want them to and so I need to change (I guess you've realized by now that I'm writing this as an aide to me but maybe some of you may have struggled with these things as well and if you have any suggestions...please send them...maybe, like with other things we've shared over the years we can once again help each other).
I love sitting in the far reaches of restaurants. it's not because of the old mafia adage 'don't sit with your back to the window' it's more that I like the show, I love people watching and as I eat a lot of meals solo, well, it's a substitute for a dinner conversation. I've been convinced for years that real life is more interesting, engaging and amusing than movies or TV (actually my cousin who for years was a top Hollywood TV comedy writer and producer (Mary Tyler Moore, Cheers, Wings, etc) told me once that most of his ideas come from observing life.  So in addition to stopping to smell the roses I suggest living with eyes open and enjoying the show.
Some interesting takeaways I saw on Creopoint.com.  They have been hosting 'impromptu' get-togethers of Creopoint members in various cities and the topics of discussion are pretty wide-ranging.  But one topic that comes up at all these sessions is how to better use, for lack of a better term, 'social networking' resources to build business.  Here are some of the comments from attendees:
More than virtually anyone in our industry, Creopoint founder, JC Goldenstein, has continued to develop tools to help us learn more about each other, about different markets, about how to use the Internet (it seems like such an ancient word now) to market services, promote deals, raise our own visibility and share ideas and knowledge.  I salute JC for his dedication and tireless energy over the past two years.  In an industry that has been one of the, if not the, slowest to adopt new technology, it appears that after trying out general business and social networking services, more and more people in our industry are turning to Creopoint.  As I've mentioned before, collaboration and networking is a cornerstone of my life, both business and personal.  Creopoint is a powerful tool and some of its more recent data-mining capabilities are very cool.  It is becoming, as they say, a "24/7 Meeting Place" for the global commercial real estate industry. If you have not yet checked it out I think it would be worth your while. 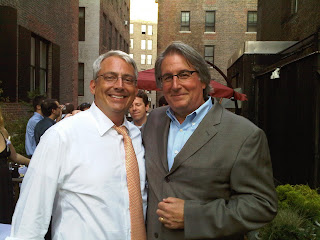 Photo:  Bob White of RCA and me on a beautiful NY summer night last night at a Baby Shower on the rooftop "conference room" of RCA's HQ on lower Fifth Avenue in NY.

These are my views and not that of my employer.
Posted by Steve Felix at 8:35 PM No comments: