Not on the road to MIPIM 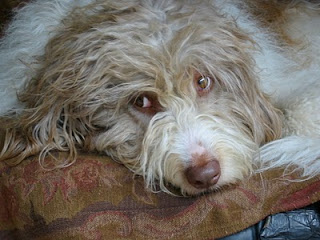 For many years, March has meant the MIPIM conference in Cannes.  This year is the first in quite a while that I won't be attending.  Last night, I caught the end of the movie, "The Reader."  It reminded me that I was first introduced to the book, "The Reader" by a Dutchman named Onno Husken.  Onno had founded The Ibus Group and was active in AFIRE.  There was one legendary AFIRE dinner at which I was randomly seated at a table full of Dutch...Onno being one of them.  It was a dinner that I will never forget and I still see Koos Gerlofs and his wife who were also at that table that night and we always laugh about it.  Although I had never met any of my table mates before, we had so much fun, perhaps for some at other envious tables, too much fun and Onno was the ringleader.  We sang.  We were loud.  Other tables looked at us but in the end, we enjoyed ourselves and isn't that what dinners at conferences are all about?  Onno and I became friendly. He had a Christmas ritual of sending a book he loved to a number of people.  I became one of the members of that list and one year he sent "The Reader."  It is a brilliant book and I have always loved it (but like with many movies, the book is better than the movie).  One Christmas, there was no book from Onno.  After a while I wrote him an email.  The reply I got was from one of his colleagues.  Onno had died of aggressive cancer around the holidays.  I was very sad.  Onno was full of life.  During one MIPIM, Onno grabbed me and said, "I need to introduce you to someone."  We walked around Le Palais looking for some Dutch guy named Marinus.  But we didn't find him.  After I learned that Onno had died, I tracked down this guy that he had wanted me to meet.  Marinus Dijkman is the publisher of those wonderful full color yearbooks such as "Europe Real Estate."  Onno knew something:  Marinus and I became fast friends and have been for many years.  We can only be grateful that Onno knew that we should meet and knew that we would find a friendship with each other.  And isn't that what being a member of the global commercial real estate community is all about?  Finding friends in foreign lands that you might never have met if it weren't for circumstances and the desire of someone to help others connect?  I will miss MIPIM this year as I have a good number of people, both in Europe and elsewhere, who I got to know during the years when I was really "On the Road" as a member of Institutional Real Estate, Inc.

I know there are some of us who have thought about writing a book in our lifetime.  I know I have and believe I will someday.  But it's a dream that not too many of us will ever be able to realize.  However, one of our brethren has accomplished just that and it's a novel to boot.  I bought it and read it last week on a long train ride.  It's a murder mystery in which the main character is a real estate investment banker.  But that's just the backdrop to a truly engaging and well-written story, one that provided suspense and held my attention right up to the end.  So, I heartily recommend it to you. The book's name, "Waking Up."  The author:  Joe Traum, formerly with Eastdil and Nomura and whom I am fortunate to call my friend.

Two dogs:  I'm certain that my dog, Sherwood (top) is really my grandfather, Herman Silverman.  When I look at Sherwood I see Herm.  I've never seen more expressive eyes on a dog before; they're eyes of the ages; they're the eyes of an old soul.  The dog below is one that I saw this morning in the lobby of a well-known Manhattan skyscraper.  It's made of stainless steel but nevertheless has the feel of what it is:  a balloon dog; and, you can't help but smile when you see it. 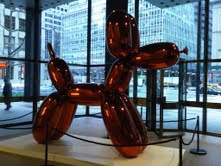 Final word on resumes:  terrasearch Partners has a very good 'resume primer' on their website.
BTW, here's their opinion on the subject we've been debating:  "A bullet point with personal interests is good. It may help you make a connection."

These are my views and not that of my employer.
Posted by Steve Felix at 12:48 PM 1 comment: