RCA mid-year reports; “above all, be true to yourself, and if you cannot put your heart in it, take yourself out of it.”

one of you guys wrote me last week asking why i hadn’t mentioned RCA’s Mid-Year Reviews.  i think it was because i can’t believe we are this far into 2011 already.  but now that i’ve overcome that, here are some take-aways from the RCA reports:

Sales Surge at Mid-Year:  Extend and Pretend Kicked Down the Road
Investment volume surged to $55.6b in Q2, a 117% increase from a year earlier
and totaling just shy of the year-end spike in transactions recorded in Q4’10. The acceleration in sales cut across all property types but was led by retail property sales of $15.2b. Prices were generally stable or improved over the quarter, but the dichotomy in pricing between the favored major markets and all others persisted, with some closing of the gap noted in the apartment and retail sectors.
New offerings also surged in Q2 and totaled $76.2b as improving prices have encouraged many more investors to list properties for sale. The volume of offerings in Q2 jumped 79% from a year earlier, the highest yoy gain since 2005, a point marking the end of the previous post recessionary period and the beginning of the pre-crisis property boom. Most property types should readily absorb this new supply of offerings, except the industrial sector, where offerings exceed closings by more than 2:1.
before sharing more of RCA’s mid-year commentary i have one comment to make:
the FDIC is doing a disservice to the industry, the American economy and the American people by allowing banks to extend loan maturities.  they are trying to do something different than the RTC did and for which the RTC came under significant criticism.  but, if the hope, and i can’t see it as anything more than hope, is that they’ll continue to allow this until the real estate market ‘picks up’, well, i’d like to know when in their crystal ball they see that coming.  oh, wait a minute, i seem to recall reading somewhere :  it’s going to be march 24th 2012.  sorry, but these assets should be cleared now.  will banks take losses?  sure.  but the positive contribution that this will make to the industry will be a good thing.  i know from talking with people on this that there is a lot of dissenting opinion and i fall back on ‘who knows?’ just a thought…now on with the RCA stuff:
i was interviewed this week for the 2012 edition of a well-known industry report.  i knew that i had left my own crystal ball somewhere in my house (or maybe the FDIC had borrowed it) but try as i might i couldn’t find it so i had to wing it.  actually, the questions i was asked got me thinking about what i’ve seen, what i’ve heard and what i believe....about the overall economy, about capital markets, about property types, about debt, about whether the situation with the banks (i refuse to write E&P) will end up being good or not, etc.  this was no ‘puffy’ interview.  and i too will have to wait to see what some of my industry colleagues had to say and what they were thinking in the middle of the summer of 2011 about our vision for 2012.  fortunately, the interviews are confidential and there are no attributable quotes....that’s a relief!
have you ever wondered why someone comes into your life at a certain time?  or why you hear a song that means so much to you just at the time you needed to hear it.  or when something arrives in your mailbox and it says things that you’ve been thinking or that you read at another time in your life but the day it appears is the day that you needed reinforcement?  well, that happened to me this week when an email called “Zen Habits” arrived.
a guy named scott dinsmore of Liveyourlegend.com wrote this special guest post on Zen Habits. maybe some of it has meaning for you too.


1. surround yourself with passionate people.
2. create space. If you don’t give big ideas room, they’ll never show up.
3. help someone in a way only you can.
4. keep a journal of what inspires and excites you.
5. challenge the norm.
6. scare yourself – live outside your comfort zone.
7. find the right reasons. you can’t control what happens but you can control your reaction to it. what challenges have come up today? How could you reframe them? the juiciest possibilities often have the best disguises. notice them.
8. learn something new.
9. the point is to constantly fuel something that interests you.
“above all, be true to yourself, and if you cannot put your heart in it, take yourself out of it.” Hardy D. Jackson
enjoy your weekend.
On the road....
july 29-aug. 14:  northern california
aug. 15-19:  new york
aug. 29-sept. 9:  vacation
sept. 12-16:  new york
sept. 20-21: amsterdam to moderate a panel at the PERE Global Forum
oct. 4-6:  las vegas to moderate a panel at CBRE’s Americas Summit on “The Commercial Real Estate Industry of the Future: A 5-10 Year Outlook.”  (Oh no, that crystal ball thing again!) Thanks to asieh mansour, CBRE’s head of research Americas for inviting me to join ray torto of CBRE and geof dohrmann of IREI in this discussion.
oct. 17-19:  chicago to attend the PREA fall meeting
nov. 2-5: washington, dc to attend the CRE Annual convention
nov. 9-10: new york to moderate a panel at the PERE forum
“Life is all about trying-trying new things, not being afraid to try...." 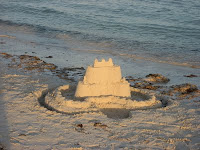 Photo: "Building castles in the sand."
These are my views and not that of my employer.
Posted by Steve Felix at 11:12 AM No comments: