A Giant in Commercial Real Estate - a friend who has made a difference! Jim Hime 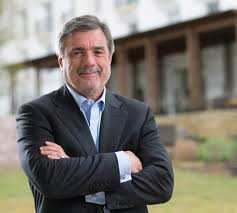 It was during the heyday of commercial real estate technology.  Jim had left his position at Hines and joined a consortium called Zethus.  Zethus was going to, in the words of another friend in the commercial real estate industry, “boil the ocean.”  I was moderating a panel on real estate technology at some sort of industry event at the Waldorf Astoria Hotel in New York City.  Jim was one of the panelists.  One day, leading up to the panel, Jim was quoted in the Wall Street Journal.  In my infinite belief that sometimes surprise is a wonderful ice-breaker, I read the quote to the audience and then asked them if they knew who had made the statement.  Out of the corner of my eye, I saw Jim looking at me with at “What the heck?” kind of look.  Well, no one guessed it and I used that as a way to introduce Jim to the group.  That was the start of a long friendship between Jim and myself.  Jim is a very modest person so I’m going to tell you something about him:  he is a published novelist.  Here is Jim’s ‘Official Site’ I encourage you to check out his books.  He’s a very talented writer.

A. It was my exit plan from a twenty-year career practicing tax law, during the course of which my main client, year in and year out, was Hines. In 1995 I had an existential crisis, to wit, I realized that if I did not make a move pretty soon, as a then 41 year old, I was looking at spending the rest of my days plumbing the depths of the Internal Revenue Code of 1986, as amended. In casting about for an escape hatch, my attention naturally turned to Hines because of their integrity, their collegiality, and their established excellence at what they do (all still true today, I’ll be bound). I let slip to Ken Hubbard, who then ran Hines’s East Region, that I might be primed for a career change, and he passed that along to then CFO, now Vice Chairman, Hasty Johnson. After an in person interview with the legendary Gerald D. Hines himself (who would have me know that my annual compensation might not be quite as, ahem, predictable as it was in the practice of law), I made the leap, on January 1, 1996, to the business side, and joined Hines in a capital markets role. I have never looked back.

Q.  What advice would you give to someone who has been in the industry for a few years or a student looking to get his or her start?

A.  Nothing, but nothing - not money, not fame, not exciting and fun transactions – nothing is more important than the honesty, integrity and trustworthiness of the people with whom you work. I have been blessed to work with some of the best people in the business, really at every career stop along the way, but particularly at Hines, at the Abu Dhabi Investment Authority, and now at USAA Real Estate, where our core values are service, loyalty, honesty and integrity. Those are values that are not universally shared in the business world, as the newspaper headlines remind us regularly - but I must say that when they are the values that guide your behavior, both as respects your colleagues as well as others in the marketplace, they lend a kind of moral clarity to what you do. So my advice is, find yourself good people and stick with them. It’s even better if they have a big balance sheet - real estate is not a place for the faint-of-heart, or the undercapitalized.

Q.  As you look back on your career, is there anything you wish you had done differently? If so, what?

A.  Not spending my first twenty years in the workaday world as a practicing tax lawyer would have been a good place to start. In fairness, I did find tax law both interesting and intellectually challenging. But it failed to satisfy Aristotle’s test of happiness (as paraphrased by President John F. Kennedy): the full use of one’s abilities along the lines of excellence. I found that in real estate, especially here in the later stages of my career when I can sometimes fool myself into thinking that I sort of know what I am doing.

Q.  Who has influenced your career most and why?

A.  My first boss at the law firm Baker Botts, a man by the name of George H. Jewell. He was a gentleman through-and-through, the consummate professional, as smart as a tree full of owls, and as humble and compelling a person as I have ever known in my professional life. Working for him helped me understand the power of kindness, laughter, unselfishness and grace under pressure. While I have not always lived up to the standard he set, I have never stopped trying to. The way he conducted himself, as a colleague and a leader, has guided me for the entirety of my forty-plus year career.
**

A year-end message from Steve
All my best wishes to you for a healthy and happy New Year!  Let 2018 be a year where all the senseless killing & hate end.  "Come on people now, smile on each other, everybody get together, try and love one another right how."  Written by Chet Powers (more popularly known as Dino Valenti) and recorded by a number of people. The most well-known version was released in 1967 by The Youngbloods). 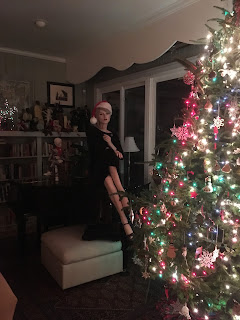 Someone's house where I attended a Christmas Party.  The woman is a mannequin!
Posted by Steve Felix at 7:05 AM No comments:

A Giant in the Commercial Real Estate Industry - a friend who has made a difference! Mark Rose

Mark E. Rose is Chief Executive Officer of Avison Young and Chair of the Board of Directors of Avison Young (Canada) Inc. He manages all strategic, financial and operational activities of this full-service commercial real estate company, which provides solutions to real estate investors, owners and occupiers throughout the world. In his nine years with the Toronto, Canada-based firm, Mark has overseen its growth from 290 real estate professionals in 11 offices in Canada to more than 2,600 professionals in 82 offices in Canada, the U.S, Mexico and Europe.

Mark joined Avison Young after holding executive positions at two global publicly traded commercial real estate firms. He served as Chief Executive Officer of Grubb & Ellis Company from 2005-2007 and was previously Chief Operating Officer and Chief Financial Officer of the Americas for Jones Lang LaSalle. Prior to his 12 years at Jones Lang LaSalle, he ran Metropolitan Realty Advisors, the brokerage and investment firm that he founded in 1993. Previously, he was Chief Executive and Chief Financial Officer of the U.S. Real Estate Investment Trust of British Coal Corporation Pension Funds.

Mark and I met during the early heyday of commercial real estate “Internet” days. He was Chief Operating Officer and Chief Financial Officer of the Americas for Jones Lang LaSalle. JLL was part of a consortium of companies that had invested in finding “the one thing” that would bring together many, most or all of the technology needs of commercial real estate companies. One day, I’m sitting in Mark’s office in Chicago, and we’re talking about that consortium, Octane. He says to me, “Turn around.” Behind me is a large white board with all kinds of stuff – some circled, some connected by dots. “That’s the whole thing right there!” It’s been great to watch Mark’s career evolve. Within a few years, he had become CEO of Grubb & Ellis during a challenging time in the firm’s history. He turned that company around – when a lot of folks in the industry thought it was a goner. Shortly after leaving G&E, he took the helm of a Canadian-based real estate brokerage company called Avison Young. As CEO, Mark has both grown and geographically expanded that business tremendously.

Q. How did you get your start in the commercial real estate business?

A. Upon graduating from university, I joined Eisner & Lubin, a New York public accounting firm. The partner and manager, who hired me, had me auditing and preparing tax and financial statements full-time for several of the firm’s real estate clients, including Harry & Leona Helmsley and the related Helmsley entities. Over time, I added more real estate syndication clients and public companies and was motivated to engage further.

A few years later, I joined Pan American Properties Inc., a U.S. real estate investment trust controlled by the British Coal Pension Funds, as Controller. The role led to me becoming the CFO and then, as part of a strategy to liquidate and repatriate the REIT assets back to the pension fund, I became CEO in 1989. Upon the successful liquidation of the Watergate Complex and $1 billion in British Coal assets in 1993, I started my own company called Metropolitan Realty Advisors in Washington, DC. I then merged Metropolitan Realty Advisors into Jones Lang Wooten and became both a Managing Director and head of the Washington, DC region in 1995. As a leader of JLW’s U.S. business in 1997, I was part of the deal team to negotiate and merge JLW with LaSalle Partners to create Jones Lang LaSalle on March 11, 1999.

Q. What advice would you give to a person in the commercial real estate industry for a couple of years or a student looking to his or her start?

A. Two very important pieces of advice: 1) Seek out and learn all aspects of real estate. Having exposure to the property management, leasing and capital markets of all product types makes you a more well-rounded and knowledgeable real estate professional. Then focus on what interests you and gets you excited. The more you love the product and service, the happier and more productive you are; and 2) Keep physical and mental wellness (whole wellness) top of mind. We are operating in trying times and our youth need to be mindful of the toll that stress takes on our bodies and minds.

Q. Looking back on your career, what do you wish you would have done differently?

A. What would I do differently? Hard to answer… I was a 26-year-old CEO of a $1-billion REIT and had the trust, strategy and confidence to liquidate it before the 1990s crash would have wiped out significant gains. With that said, I always wished I had the experience at that time to recommend to British Coal that it should reinvest in the U.S. in 1994.

Q. Who have been biggest influences on your career and why?

A. The answer to this question, for the last 20 years, has been my mentor: James O. Boisi. As Vice-Chair of Morgan Guaranty and Chair of Pan American Properties, Inc., British Coal Pension Fund’s REIT, he taught me to focus on stakeholder returns and making everyone around me better than I believe I could be. He convinced me that listening was more important than talking and that those who have come before us have forgotten more than we know.

Jim played a major role in defining and promoting me at such a young age, but as I look back today, there are others who need recognition. My wife Allyson has been the rock of a 30-year marriage that left her alone with three children as I traveled and built companies. Her confidence in me and encouragement to chase what I love, and believe in, has allowed me to pursue my dreams. Finally, over the last nine years, my partners and family at Avison Young have reinforced my belief in culture and working with partners who believe in doing what’s right first and what’s profitable second.