A street from long ago


I saw Zygi Wilf's name in the news this week.  I guess if I were a follower of the NFL (National Football League...no, it's not soccer!) or of the Minnesota Vikings, I would know every move Zygi makes.  But I don't and I'm not too sure that I ever met Zygi but if I did it was after his uncle Harry died.  Let me explain:  In the 1980's a good friend of mine, Stan Berenzweig, who founded and operated a retail chain called "Rag Shop" introduced me to Harry Wilf.  Harry and his brother Joe (Zygi's father) came to the U.S. after surviving the holocust and got into the real estate business.  They developed and operate tens of thousands of garden apartment units (aka mutli-family housing) and eventually shopping centers which were built on the commercial parcel of one of their large apartment communities.  Harry took a liking to me and I used to go over to his modest house in Hillside, NJ (the same house he lived in for a long time) and we'd go for a walk, his constitutional, after dinner around the neighborhood.  I'll never forget the first walk.  We started from his house and we're walking down the street and we run into a guy.  Harry introduces me and as we walk away he says, "He's one of my partners."  I learned that Harry had a lot of partners.  During the time Harry and I knew each other I was working for a developer in New York called Mall Properties and he was always interested to hear what we were doing as I was to hear about what he was doing.  He listened to me and often gave me good advice....particularly when I moved from one house (that I could afford) into one I couldn't afford and for the wrong reasons.  I'd see him from time to time.  After a relatively long period between walks someone told me that Harry was sick; that he had cancer.  I called his house and said I had heard he was sick but did he want to go for a walk?  He said, not that night but to call him in a couple of days.  I did and he said, "Come over."  I got there and his wife met me at the door.  "He hasn't been out for a walk in quite a while but he wanted to walk with you tonight.  Don't let him go to far."  We walked.  We talked.  Only once about his health and then the subject was dropped.  He died the following week.  When I went to their home during the "Shiva" period his wife told me that I was the last one who he walked with.  He was only 68, the same age as my mother was when she died of cancer.  I sat down in a chair in their living room near his brother Joe who was totally distraught as you can imagine.  He was sitting with his head hung low.  After a few minutes, he looked up at me.  I said, "I was very sorry."  He said thank you and then asked me how I was doing; I realized that Harry and he talked about me.  Who knew?  I didn't stay too long and haven't had any contact with the family since.  Harry and Joe were from the old country as they say.  They built a business on being smart and tough.  One time when we were walking, I said, "Why don't I come work for you?"  Harry's said, "I don't pay my people anywhere near what you're making in New York (their company was based in New Jersey).  I have a lot of family that works for me. I don't pay them all that much but they earn a little piece of a deal that they work on."  He was describing the typical real estate family business model if you can call it that.  I have always cherished those walks I took with Harry.  I don't have anything more profound to tell you.  I guess I was just thinking back on those days after reading that Zygi Wilf lent three of his players his private jet to go to Hattisburg, MI to convince Bret Favre that he should play for the Vikings for one more season.  Seasons change.  Harry used to fly coach to Florida every winter! 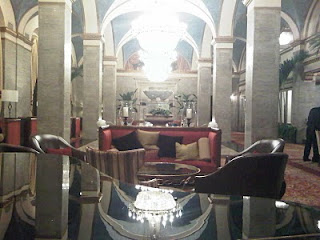 Photo:  My view from a beautiful grand piano in a classic hotel lobby this week.

These are my views and not that of my employer.
Posted by Steve Felix at 3:59 PM No comments: