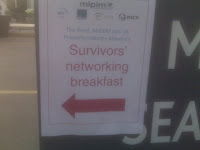 This week at MIPIM in Cannes started off with a beautiful full moon sitting low off the horizon of the Croisette (the main drag) and you knew it was going to be a good week. While too many people were hung up on exactly how many delegates attended MIPIM it was a huge success. My guess is that the number was between 18-20,000 which, given the economic circumstances we’re all dealing with shows that MIPIM is considered by many people in the broad commercial real estate industry to be a ‘must attend’ event. One of the glaring differences this year was the greatly reduced presence of the Russian cities and companies who in the last few years had become virtually omnipresent. In an informal poll I heard a number of people who had stands (booths) in the Palais say that it was a better show in that it allowed you to have real, substantive conversations with people and the quality of the delegate was of a higher level. This, to me anyway, is what a ‘trade show’ is all about and while, when you ‘open your door’ to anyone you run the risk of having to accommodate the random person coming up to you looking for financing for a luxury hotel to be built in East Jibib it’s just in a day’s work.

The MIPIM Summit TV show went off really well (and it’s not just my opinion) and my co-host, Janice Stanton of Cushman & Wakefield, Pete Reilly of JPMorgan, Dietrich Heidtmann of Morgan Stanley and Joe Valante of Allianz proved that transparency, honesty and respect (for one another) is the key to both a successful panel and to doing business. My appreciation also to my friend Marinus Dijkman of REP (Real Estate Publishers) who brought me into this opportunity and who was the coordinator of the event. Rose-Noelle Prichard of Reed Midem (MIPIM) and her team made this all possible and ‘first class.’ Selected video clips of the Summit will be available shortly; I’ll let you know. (You can read more take-away quotes from the MIPIM Summit on the REP website.

So, what was the sentiment this week? Clearly realistic but also realistically optimistic; at least from those who have been through other cycles. When I polled the MIPIM Summit group about when they feel we’ll ‘hit bottom’ globally (not an easy question given that each market is on it’s own clock), the strongest vote was for 1Q2010. But, one panelist said "make no mistake about it, there are great buying opportunities in markets such as London whose downturn occurred earlier". Debt is clearly the biggest question; when will it return and from what sources and what will it look like. And while, as one of our panelists said, “it’s interesting that we’ve spoken here for almost 90 minutes and no one has said the words “Sovereign Wealth Funds”, some feel that they will be come a real source of debt going forward. While we don’t know what ‘normal’ will look like when it appears it’s clear that the commercial real estate industry has gone back to the basics of sound asset/property management to increase cash flows from operations. So, good things do follow bad. But to sum it up, as I’ve written to you before, if you are now or aspire to be a player in the global commercial real estate industry, MIPIM is one event that you must attend each year.

This week I also got to meet a fellow who has been reading my column for years and we’ve occasionally emailed each other but had never met. This is when life is good. And, will all the stress of business, the drain of the worlds financial mess, the horror of more random murders by lunatic people in both the U.S. and Germany this week and the news that friends are ill, it behooves us to move forward, to keep on keeping on and to be kind to each other as, no matter where we’re from, we’re all in this together. There was much laughing this week at luncheons and dinners; there was much camaraderie, perhaps the feeling of being drawn together by adverse market conditions. But whatever it was it showed that more and more as people get to interact with others from countries and societies foreign to them, we learn more about each other and that, my friends, is what I believe will bring us closer to a truly global community. This week gave me even more hope of that promise.

Many years ago I adjusted my expectations, make that lowered them, about what I’d like to accomplish at any industry event. My approach has been that if I can come way with having met one person that I hadn’t known that is meaningful, the event was a success. This week I had that happen as I met and talked with a man and I know that we will stay in touch for a long time and become friends. (Note: My expectations are generally exceeded but I never expect them to be….that’s the beauty of it!).

Final thought. The suggestion to call this column “On the Road” was suggested by a former colleague who did not know that my favorite all-time book was Jack Kerouac’s “On the Road.” Recently, I bought “On the Road with Charles Kuralt” (a CBS News reporter). I just finished reading it. It’s a good read. But I want to share with you how the book ends. It’s about a tree alongside Highway 50 in Delta, Colorado: “Just looking at it (the tree) makes you think about how unexpected life on earth can be. The tree is so lonely and so brave that it seems to offer courage to those who pass it-and a message. It is the Christmas message: that there is life and hope even in a tough world.”


These are my personal views and not that of my employer.
Posted by Steve Felix at 2:46 PM No comments: