Thanks to the generosity of IMN's Todd Rosenberg,  I attended their eighth annual Real Estate Opportunity and Private Funds Conference this week.  There were a lot of people and I met a number of people for the first time which is something I love doing.  The attitude was clearly upbeat and not just window-dressing.  I listened to people telling me about a number of interesting niche plays and also a number of brand new companies that had been formed to take advantage of opportunities that are starting to surface.   Here are some of my take-aways that I'd like to share with you:
This week I got to spend a couple of days at The Montage Hotel in Laguna Beach, CA (although I stayed directly across the street at a Travelodge where I stayed once before and is one of the best kept secrets about attending an industry event at Montage...oops, it's not a secret anymore). The Montage property is one of the most beautiful In the U.S. Last evening, as the setting sun offered a deep orange scarf on the ocean horizon, I stood, high above the Pacific and listened to the waves. There was no other sound. I have always loved the sound of the surf. My grandfather, Herman Silverman, taught me and my brothers how to swim in the Atlantic Ocean at Silver Point Beach Club in Atlantic Beach (Queens), New York. I haven't had a moment like this-just me and the sound of the night surf-for a long time. It is extremely special and peaceful and got me thinking of how wonderful the simple things in life are. Very!
Observation:  Some people on panels (and probably in any conversation) who used name-dropping to impress people are probably blind to the fact that most times it really doesn't impress people.
Panel suggestion:  When you are on a panel and it's your turn to speak and you agree with what's already been said by your fellow panelist (s), simply say, "I agree with Harry" and don't regurgitate the same thing just to hear yourself talk.  The audience will really appreciate it.
There are many ways to spend money to market your firm's products and/or services.  Advertising.  Event sponsorship.  Event attendance.  But how do you measure the result of spending that money?  How do you quantify the correlation between the cost and new revenues generated?  It ain't easy.  In fact, it may be almost impossible except in rare instances.  Retailers for years have had an easier way.  The coupon.  When you use a coupon to make a purchase, the retailer knows that you saw and ad  clipped it and brought it into the store to buy that particular item.  The coupons are coded so they know which publication you got it from.  Things have been changing since Al Gore invented the Internet with the use of easily available 'Discount Codes" but that's a more complex discussion for another day.  In one of my business development jobs, where I was marketing a service, we analyzed what it took to land a new client.  We found it took, on average, seven face to face meetings with a prospective client before they agreed to sign up.  But we also determined that it took at least 4 meetings to determine the likelihood of that firm becoming a client.  We resolved to find a way to reduce both the 7 and the 4.  But it's not that simple and, what if you're wrong?
In one of the songs on my first CD I sang 'Sometimes I think I think too much.' And I believe that to be true. But I've been thinking this week of the many times in my life when I didn't think enough...when I made decisions too quickly, when I had knee jerk reactions to things, when I got pissed off and even angry when someone didn't agree with me...after all I was always right, right?  But I'm fortunate in that I feel that while sometimes it's two steps forward and one step back (sort of Springsteen) I have been making progress. I was reminded this week of something a friend told me a number of years ago-maybe I've even written it in this column: "You don't have to be going straight-just forward." How simple. How true.  I wrote it down in my diary...again.
Real deal musician of the week:  David Allen Baker plays piano and sings virtually any song you want in the lobby of The Montage (it's open to the public and he has a loyal local following).  You probably all know the Billy Joel song, 'Piano Man', right?  Well, before breaking through, Billy was a piano man at a bar in Los Angeles and that is what that song is about.  David is a true piano man; one of the most talented, versatile and sensitive players I have ever heard in my entire life.  He is also a very nice guy.  I made one request:  Jackson Browne's legendary tune, Doctor My Eyes.  David's personal, heartfelt arrangement is giving me goose bumps as I type this early Friday morning.  If you are ever in the area, check to see if he's playing.  I guarantee you will walk away saying, "Man what are you doing here."  Fortunately, for many people, he is there!
On the road...
Jan. 22-23:  Ormond Beach, FL for the unveiling of my dad's headstone.
Jan. 24-31:  New York (including seeing Humphrey’s McGee in concert at the Best Buys (formerly Nokia) Theatre on Jan. 28.
Jan. 26:  A quick trip to Chicago
Feb. 1-3:  Dana Point, CA to attend IREI’s Fifth Annual VIP Conference.
Feb. 7-10:  New York
Feb. 11:  Chapel Hill, NC to be a judge in the University of North Carolina/Keenan-Flagler Real Estate Challenge
Feb. 14-18:  West coast
Feb. 27-Mar.1: Santa Monica, CA to attend NAREIM's Senior Executive Officer's Meeting (National Association of Real Estate Investment Managers)
Mar. 16-17:  Washington, DC for the PREA Spring Conference
Apr. 13-15:  Venice to attend INREV's Annual General Meeting
May 12-14:  North Palm Beach, FL for the annual meeting of the Homer Hoyt Fellows 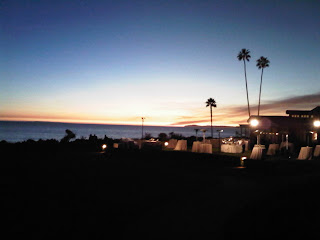 Photo:  Last night.  The Montage Hotel, Laguna Beach, CA.  Just before the IMN cocktail reception began (This photo taken with my BlackBerry doesn't really do justice to the colors but it's the best I could do).

These are my views and not that of my employer.
Posted by Steve Felix at 6:09 AM No comments: