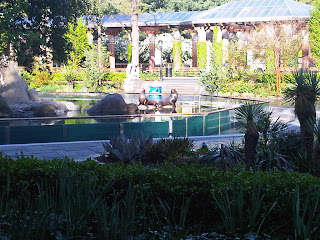 In line with my policy of non-attribution (except in the rare case where someone may want their name mentioned) I want to share with you some random things I heard and read this week.  But first, something of my own:  I'm going to shoot the next person on a panel who uses the phrase "Extend and Pretend."  Period.

After waiting nearly a week as an Icelandic volcano spewed turbine-mangling ash into the atmosphere — thwarting flights into, out of or through Europe — the airlines are supposed to begin flying passengers again on Tuesday.
Governments, businesses and most travelers, irritated by disrupted itineraries and worried about lost productivity, are delighted to see planes back in the sky. But I, for one, wish this blessedly jet-free interlude could have continued a little longer. In the eccentric, ground-level adventures of some stranded passengers — 700-mile taxi rides through Scandinavia, for instance, perhaps a horse-drawn stagecoach over the Alps if things got really desperate — I’m reminded of the romance we trade away each time we shuffle aboard an airplane.
In the five decades or so since jets became the dominant means of long-haul travel, the world has benefited immeasurably from the speed and convenience of air travel. But as Orson Welles intoned in “The Magnificent Ambersons,” “The faster we’re carried, the less time we have to spare.” Indeed, airplanes’ accelerated pace has infected nearly every corner of our lives. Our truncated vacation days and our crammed work schedules are predicated on the assumption that everyone will fly wherever they’re going, that anyone can go great distances and back in a very short period of time.
So we are condemned to keep riding on airplanes. Which is not really traveling. Airplanes are a means of ignoring the spaces in between your point of origin and your destination. By contrast, a surface journey allows you to look out on those spaces — at eye level and on a human scale, not peering down through breaks in the clouds from 35,000 feet above — from the observation car of a rolling train or the deck of a gently bobbing ship. Surface transport can be contemplative, picturesque and even enchanting in a way that air travel never will be.
My girlfriend and I recently set out to circumnavigate the globe without the aid of any aircraft. Along the way, we took the Trans-Siberian Railway across the wilds of Russia from Moscow to Vladivostok, and drove a car through the empty doomlands of the Australian outback. These journeys take less than half a day if you go by plane. Each lasts nearly a week when you stick to the ground. But taking to the air means simply boarding, enduring the flight and getting off at another airport. Going our way meant sharing bread and cheese with kindly Russians in a shared train cabin, and drinking beers with Australian jackaroos (we’d call them cowboys) at a lonely desert roadhouse. These are warm, vivid memories that will stay with us forever.
Think of the trans-Atlantic flights you may have taken. Do you remember anything about them? (Turbulence, bad in-flight movies and screaming children don’t count.) Because flying is an empty, soulless way to traverse the planet, the best flights are in fact the ones you forget immediately after hitting the tarmac.
Now, imagine floating across the Atlantic on a ship. Do you think you might enjoy those days of transit — the joys of a starry night in the middle of the ocean, or a round of drinks with new friends as you look out across the stern railing at the glimmering water — and hold them in your memories well after your vessel made landfall?
My hope is that some travelers stranded by the volcanic eruption have been able to discover the joys of slow travel for themselves. With airplanes out of the picture over the past few days, pretty much the only form of public transport between the United States and Europe has been aboard the Queen Mary II, making one of her weeklong treks between New York and Southampton, England, or on one of the select few container ships that will rent spare cabins to civilian passengers.
I can vouch for the container ship option, having taken a nine-day-long freighter passage from Philadelphia to Antwerp as part of my globe-circling trip. You can hang out on the navigational bridge with the officers, who will teach you to chart a course. You eat your meals with the crew in the mess room. You spot broad-winged seabirds and enormous whales and pods of dolphins.
Were you to see a plane flying overhead, you’d look up at its contrail and pity those poor people shrieking through the sky in a cramped aluminum tube. They will arrive days before you, sure. But they will have missed out on the wonders of a journey where there is no choice but to sit back, relax and pleasantly ruminate, as the ship chugs steadily through the waves.
Seth Stevenson is the author of “Grounded: A Down to Earth Journey Around the World.”


On the road...
Disappointed that my Italy trip was canceled due to the volcanic ash but it was better not to start the trip and be stranded.  How many more amazing things will we see in our lifetimes?
April 26-27:  Pennsylvania
May 6-7:  Chicago
May 8-16:  California

May 17-18:  A couple of  midwestern cities
July 13-16: Laguna Beach to attend the NMS Real Estate Roundtable

End-note:  Yesterday was the 40th Anniversary of Earth Day.  At the first one on my college campus, a small group gathered in front of a building called "The Round Building" which I guess was more environmentally efficient than "The Library" or "The Gym" which were both rectangular buildings.  After all, in a round building, doesn't the heat and air-conditioning circulate better because the air bounces off and goes towards the middle of the room?  Anyway, my thought is that while a reminder that we need to respect and protect the Earth is important, like the title of one of my new songs, "Everyday with you is Valentine's Day", every day should be Earth day...we have only one Earth and goodness knows it needs us to watch out for it's well-being lest future generations have nothing to celebrate on April 22.

Photo:  Please enlarge the photo when you have a chance and zoom in.  These guys are not statues!


These are my views and not that of my employer.
Posted by Steve Felix at 8:51 AM No comments: