Some real estate tidbits I’ve recently heard about investing in commercial real estate today:
As we rapidly approach the 10th Anniversary of the World Trade Center, Pentagon and Shanksville, PA terrorist attacks, my friend, and real estate columnist for The New York Post, Lois Weiss, wrote this in her column this week:
The World Trade Center site is humming with activity. On Monday, we walked across the site and rode the construction hoist up at Silverstein Properties' 4 World Trade Center as the north Memorial pool was being tested.The nearly one-acre square pools have water that cascades down the sides and flows into another dark square. Each pool is rimmed with the names of the victims, which will glow at night.
All the plaza's white swamp oaks are growing in nicely, with more being added all the time. The Greenwich Street cut through the site is just starting to be filled in as an actual road, slicing off 2 WTC, the Calatrava PATH station, 3 WTC and 4 WTC from the western half of the site with the Memorial area and 1 WTC.
Four WTC has asking rents in the $80s a foot. New York City and the Port Authority have already leased space there. The lobby area feels cocooned from the outside, yet its polished black granite walls will reflect the area through its 65-foot-tall windows.
The largest of the buildings, 1 World Trade Center, where Condé Nast just signed its 1.1 million-square-foot lease, is only halfway to its 1,776 feet but is starting to become visible from all over.


I’ve picked out some of the responses from an interview with Jack Dangermond, founder and president of Esri, which offers geographic information systems, that I thought you might find compelling:


“If I talk a lot, it must mean I’m smart.”  I learned that this is a style of some students in graduate school programs. But I also witnessed it recently first hand where one guy in particular in a group setting continually rambled on and on, trying to impress the group with how much he knew.  But in taking a pulse of the body language of many of the group members, I don’t think this guy was winning any points with them.

Friend and fellow blogger, Ann Oliveri, offers something very interesting in her post this week:
How do you vet candidates for key positions?
The New York Times reported this week on a method being deployed in medical school admissions processes that test for people skills, the multiple mini interview or MMI.  It's "the admissions equivalent of speed-dating: nine brief interviews that forced candidates to show they had the social skills to navigate a health care system in which good communication has become critical."  Each round is eight minutes and features a different ethical dilemma.  "The most important part of the interviews are not a candidate's initial responses--there are no right or wrong answers--but how well they respond when someone disagrees with them... Candidates, who jump to improper conclusions, fail to listen or are overly opinionated fare poorly because such behavior undermines teams. Those who respond appropriately to the emotional tenor of the interviewer or ask for more information do well..."  The goal is to find those with the ability to work collaboratively with colleagues and establish trust with patients. And, "candidate scores on multiple mini interviews have proved highly predictive of scores on medical licensing exams three to five years later that test doctors' decision-making, patient interactions and cultural competency."
I find this approach fascinating.
After meditating twice a day for about two years I stopped doing it but not because I didn't see that it made a difference-it did. So why did I stop?  Beats me but my brother has been encouraging me to start again and I am going to.  Interestingly there's an article in the Spring 2011 issue of Ode magazine called, "Management as meditation."  It presents a compelling argument for meditation, in the workplace:
I am going to start meditating again tomorrow. 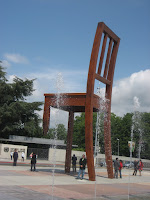 
These are my views and not that of my employer.
Posted by Steve Felix at 7:43 AM No comments: