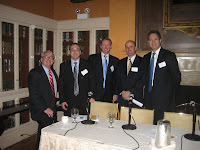 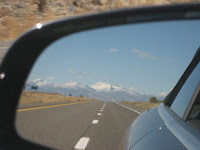 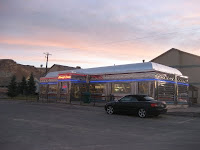 I just got to California after a leisurely drive from New York. How can I say it was leisurely? Well, because I didn’t have to ‘push’ it and at the most drove eight hours in one day. I usually drive five over the speed limit which means for most of the last two days I’ve been going about 80 mph. What did we ever do before cruise control? I’ve crossed the country several times, although I wish I had done it when I was younger and had taken three months to really explore America, or said another way, explore the ‘real’ America (Hey, it’s never too late). But this ride was confined to Interstate 80, which begins just across the George Washington Bridge from New York and ends in San Francisco. The driving weather was mostly good except for two long periods of rain and fog. The snow that had fallen a few days before in Nebraska didn’t affect the roads but it’s a bit too early to see someone shoveling snow don’t you think?

Oh, BTW, I asked at every place I stopped: business is still down and people are ‘hopeful’ it will come back next year. Maybe by pure definition it’s not a recession but if business recedes, well, it doesn’t pay to get technical, what it is it is and business is down (except at Goldman Sachs).

Random thought and signs I saw on the road: Beautiful fall foliage in Pennsylvania; many Americans seem to have simple desires: peace and prosperity; Megan Muldoon finished here first Chicago marathon; Sean Felix (my grandson) seems to be on the verge of talking; Warning: Indiana Turnpike…as you approach Illinois…speed limit suddenly drops from 65 (or maybe 70) to 55 (can you say ‘speed trap?)-a guy who didn’t slow down got pulled over by one of the three, count ‘em, three state troopers just sitting and waiting to get people just two miles before paying the toll; I’m pretty sure that I’m right: Barry Sternlicht, Chairman of Starwood Hotels, invented the “Heavenly Bed” concept. But I don’t think it was he who invented the curved curtain rod that takes a small shower/bath and turns it into, well, a less claustrophobic environment. I would put this great invention in the same category as: Teflon, the Thermos (How do it know to keep a beverage hot or cold?), the wheel, fire, Velcro; Bob Feller Museum (aka Rapid Robert, a Hall of Fame pitcher for the Cleveland Indians…didn’t think they had one did you?), John Wayne’s Birthplace, “Here’s where The Bridges of Madison County are”, America is the land of casinos, all the old DJ’s from WNEW-FM in New York have reinvented themselves on satellite radio (one complaint…. listening to the “Classic Vinyl” station is like listening to Top-40 AM radio years ago-songs get replayed way too often and while I like The Who, there’s only so many times you can listen to ‘Won’t Get Fooled Again” in any one day); 10 inches of snow last week in Nebraska; Route 80 was closed in certain places (way too early for this kind of stuff); Just east of Echo, UT you will find the nicest state run tourism rest stop; Clean Rooms; Wi-Fi, 24-Hour Pool; TripAdvisor.com comments are pretty accurate; I went to a restaurant anyway and paid a small price for it; Best Western hotels are all independently owned and operated; Route 80 closed ahead when lights are flashing; Exit NOW!; Recently remodeled; We serve two kinds of wine here: red and white; Small towns have some very friendly people, even friendly to strangers if you’re friendly (but not too friendly) to them; Warning: New York Strip Steak does not mean the same thing in all places; Two for One Cocktails; Free Breakfast; Free Continental Breakfast; Free Hot Breakfast; Boo on CD: E.L. Doctorow’s new one, “Homer and Langley”-a good choice for the road if I do say so myself; America is one big country; the open spaces and clean air are reminders of what life is like outside our busy metro and suburban areas; long-haul truckers probably don’t deal with much politics on their job; light traffic all the way; no real driving ‘jerks’ (until I crossed into California; no tornadoes this time (but for old times sake I did have lunch in Kearney, NE; fresh brewed decaf coffee is not available everywhere; Runaway Truck Ramp; Wright Bros. Drive; Loggins & Messina playing in Wendover, NV; our tax dollars at work (lots of highway improvements being done….speed limit reduced to 55mph or less if you’re behind a big truck going up a steep incline); Prison Area-Do not pick up hitchhikers; of all the new Greyhound buses going in the opposite direction only two had signs showing their destination: both said Burlington, VT (is there a Phish concert or something?);

Thanks to my friend Debbie for sending me this link apropos of the list I published last week. Good reminders titled, "Always Time to Get Your House in Order."

I cannot let this week go by without a comment about yesterday’s “Kid in the Homemade Balloon” stuff. While this guy, the father, is strange, the media was totally exposed as to what it has become: an ambulance chaser and an irresponsible one at that. When I got to my room hotel yesterday I turned on the tube and saw at least four stations carrying the story that was no story. Then, early this morning, saw a bit of CNN’s Exclusive Interview with the family where Wolf Blitzer asked the kid, “What did you mean when you answered a reporters’ question about “Why did you do this?” by saying, “We did it for the show.” For those of you who saw this, the kids father jumped in, realizing he had been totally exposed, but not caring because all he was after was being totally exposed, on international TV. With too much time on their hands and too much focus on being first and not reliable, TV news is a joke. Actually, news, in its’ purest form is not a joke but stuff like this and networks like CNN are really, in my personal opinion, not only propaganda tools for the government but when you get down to it, simply entertainment shows related to who can get the highest ratings. Scams, shams, what have you, over the years have exposed CNN and others to what they really are but sadly, I don’t think they’ll ever learn or care. It’s just up to us as to what we spend our precious time doing, listening to and watching.

Addition: The book that David Lynn and his colleagues from ING Clarion just published is called "Active Private Equity Real Estate Investing." I forgot to include the title last week.

“Where is this?” Photo Contest: OK you guys, the last couple have been softballs but this one (lower left) is this week’s contest. No Googling Permitted. However, I am certain that some of you will say that this is a photo taken in a location that seems logical location, given the use of the premises. But be careful.