My Last Visit With Myron

Recently I wrote about my last remaining uncle, Myron. It took weeks but I finally heard from his niece, Adrianne, on his wife Connie’s side.  Adrianne has become the conservator and has overseen all aspects of Connie and Myron’s life for almost a year.

Last Sunday, I drove up to Salisbury, CT to visit Myron.  I was shown to the dining room and was pointed to a table in a corner where a man with long stark white hair sat in a wheelchair facing the wall.  I couldn’t believe my eyes.  One of the attendants announced that he had a guest. I walked around the table so he could see me.  Myron looked up with rather vacant eyes but I could tell, somewhere in the deep recesses of his mind, he was trying to figure out who I was.

I sat down at the table and asked Myron if he recognized me.  I didn’t want to push him and really saw no recognition.  One of the effects of his stroke several years ago was that he speaks in a barely audible whisper and the ‘words’ don’t generally make sense. I left him for a minute and asked the nurse about his condition.  He had not been eating or drinking very much and the nurse felt that he was close to the end. It was difficult to hear those words in such a matter of fact way.  But I guess when you’re in that business professionally it’s different than when you look at someone who you’ve known your whole life and realize what close to the end means.  It’s a sad realization, about Myron, about all of us…

At one point Myron randomly said, ‘San Francisco.’   That made me smile slightly as for all the years I lived in Napa, CA he never got it out of his mind that I lived in San Francisco.  Those two whispered words made me realize that he may actually know who I am!

After a while I left him to himself.  I drove back to New York wiping tears from my eyes and thought about the interaction - or lack thereof  - that I have had with Myron over the years.  I am pretty sure that he’s actually my godfather.  I’m not certain what that relationship represents but as my mother’s only sibling, he always had a special place in my heart.

As I was finishing up this column, I was notified that Myron passed away, peacefully, early Thursday morning.  I hope he’s in a better place. 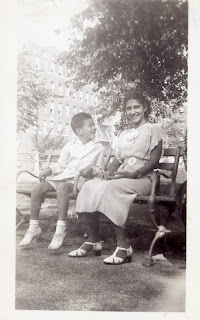