Yesterday, INREV, the European Association for Investors in Non-listed Real Estate Vehicles, published the findings of its' latest survey of their 359 members.  Here are some relevant highlights:


This is very good information coming from the proverbial horses' mouth.  But if we look at the 'headline news' in our industry, there's a lot going on although it may not resemble the 'business as usual' we had gotten used to (up until a few years ago).  There are big deals being made.  There are big hires being made.  There are big plans being made.  And, yes, there is some big money being invested by pension funds and their brethern.  Perhaps there are more separate/segregated accounts and more joint ventures.  There has been a lot of talk about interest in 'club deals' but I haven't been hearing about too many of them.  Queues grow to get into large core open-end fund grow with seemingly no end to the appetite of investors.  So, in some ways we could say that things are the same.  But they're really not.  So much is changing in our industry and if you take the time to step back, like I've been doing at this point in my career, and get off the dance floor and go up in the balcony, you'll see that a new landscape is being painted.  And as most paintings of landscapes don't include people, we need to find a place for ourselves in that painting.  For many, it will look the same.  But for others, those who thrive on challenges, those that crave change in their careers and lives from time to time and those who see that to grow you have to embrace change, this is a very exciting time. I am extremely fortunate to have a special network of industry friends.   As many of you know, my current job is ending at the end of the year and I am looking at different options for my next gig.  Thanks to those friends, I have gotten to understand better than at any other time in my life who I am and what I bring to the table.  No matter what I decide to do next, with a little help from those friends, I have learned to appreciate myself more.  Some things take a while.

One member of our OTR community sent me a link to a recent blot post.  It's titled "I Don't Understand What Anyone Is Saying Anymore."  I'd recommend you take the five minutes it took me to read the whole thing but I've pasted this section below as it struck a particular nerve in me.  I've written before about some research I've done about why it's not good or right to use acronyms.  Here is this guy's take on the 'disease.'
Acronymitis
This is a disease of epic proportions in the world of charity. I was at a meeting just two days ago at which several well-meaning staff members of a charity were presenting to their board, and the meat of their discussion revolved around the acronyms SCEA and some other one that began with "R" that I can't recall. In the span of three minutes these acronyms must have been used eight times each. They were central to any understanding of the topic at hand, but they were never defined. So I had not the vaguest idea what the presenters were talking about. None. Could have been talking about how to make a beurre-blanc sauce for all I know.
It was reported this week that the Pearl Harbor Survivors' Association may be disbanding due to the aging of it's members.  It got me thinking:  My father, a WWII veteran, never talked with us about his experiences during the war.  Actually, he didn't talk much about his growing up at all.  But that changed in 1990, when I overcame my fear of talking about important stuff and brought a cassette recorder to my Aunt's apartment where she was making breakfast for my father and me.  I pulled out the recorder and put it in the middle of the table and said that I'd like to ask them some questions and record the conversation.  Neither objected.  We had a great conversation which was the ice-breaker for further Q&A with my Dad on other occasions.  Maybe he was just ready to talk and he was just waiting for us to ask him.  So, my thought about the memories and experiences of people in any walk of life: we need to interview them and record those conversations.  We need to do this stuff both in our families and in our industry....before the stories are lost....forever.  We need to start doing this now!
Smile of the week:  3 minutes 34 seconds.  Who knew James Cagney and Bob Hope could dance? 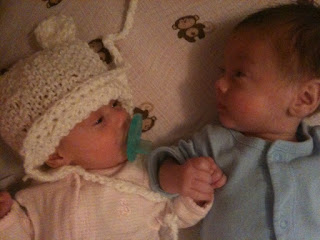 Bigger smile:  Edie & Benjamin Felix (the newest additions to my team of grandchildren)
On the road....
Dec. 10-16:  New York
Dec. 12:  "Holiday Drink Thing."  Russian Vodka Room, 265 West 52nd Street  (Between B'way and 8th-closer to 8th).  A bunch of commercial real estate industry folks will be stopping by between 6 and whenever to toast the new year (or maybe the end of this one).  If you're around and have some time I'd be great to see you.
Jan. 18-21:  Laguna Beach, CA to attend the IMN Winter Forum on Real Estate Opportunity & Private Fund Investing.
Jan. 24:  London to attend INREV's UK Winter Seminar 2012
Jan. 25:  London to moderate a panel at the Thompson Reuters Global Property Outlook 2012
Jan. 30-Feb. 1:  Scottsdale, AZ to attend IREI's VIP Conference.
These are my views and not that of my employer.
Posted by Steve Felix at 4:25 AM No comments: