Simply a week on the road

Before getting into the eclectic stuff, here are some bullets from RCA's Mid Year Capital Trends Report which was published yesterday:
There is action but from where I sit I'm not sure it's enough action to suggest that expectations of buyers and sellers are copasetic.  In some ways it feels like 2010 is another year we'd just like to get through and we're looking to 2011 to be the year of our recovery.  There's a bunch of European money coming into the U.S. but I don't see anywhere near the velocity either going the other way or even coming out of the U.S. investors piggy banks into the U.S....yet!

I don't know why it took me so long to realize or remember this but many hotels offer free bottles of water in the gym and also for joggers.  Even if you don't work out or jog go get some of that free bottled water and bring it back to your room instead of paying $4.79 for a bottle in your room.  Duh to me!
I was talking with someone last week about managing emails and remembered something from long ago, before email existed.  It's about managing paper that comes across your desk and I thought it could be applied to email as well.  Here it is:  When you open and read an email, do one of three things with it:  (1) Act on it; (2) Delegate it; (3) Delete it.  I purge my email account regularly as the clutter just, well, clutters things.  I do use some files to keep certain things but have realized that I'm keeping a bunch of stuff that isn't necessary.  Anyway, this system, if you will, is part of some 'stress management' stuff I read a long time ago and sometimes refer back to it.  We're living in stressful times and unless we make the effort to manage it ourselves, to keep from being sucked into the whirlpool, no one else is going to help us.
There's an excellent piece in the NYTimes Sunday Magazine this week called "The Web Means the End of Forgetting."  Given that a couple of years ago I decided to drop off Linkedin (which took a lot of effort to accomplish), dropped off Facebook,  signed up and used Twitter only in the days leading up to the birth of my grandson, reading this article made me feel good about my decisions.  It's a very interesting read and will get you thinking about things that you probably have either not thought about or wish you didn't need to think about in terms of the Internet, the 'cloud' and what have you.  But there are a few of quotes from the article that I want to share with you here (Disclaimer: It's written by a law professor and thus has a lot of references to suing people, etc. but still worthwhile):
It seems like we may be entering a time where people may just start thinking of future consequences before acting.  This, I read in a random book plucked off a hotel library shelf this week, is a form of wisdom.  But, is wisdom only something that comes with age?
Without wanting to give him even more press, an industry friend of mine sent me this about Tom Barrack's recent diatribe:  "Best evidence yet for a breathalyzer on a Blackberry."  You gotta love it! 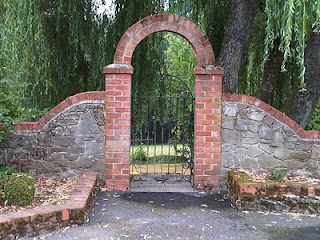 Photo:  Haslemere, Surrey, England
These are my views and not that of my employer.
Posted by Steve Felix at 11:57 AM No comments: