A road paved with roses?

I had breakfast this morning with a long-time industry friend who is one of the top industrial brokers in New Jersey.  His market update included the following story:  He's seen more interest from tenants in the past few weeks (which is a good thing).  Recently he showed a building to a prospective tenant who was accompanied by their own broker.  One of the first things the tenant and their broker asked was:  "Does the landlord have the money to complete the T/I?"  Also, the tenant's broker wanted the full commission for themselves leaving the landlord's broker (my friend) in a position to have to go back to the landlord and tell him that if he wanted a real shot at landing this tenant, he'd need to pay and additional 50% commission.  In sharing this story with some colleagues, I learned that this is not too different from the period we fondly refer to as the "Tech Wreck" when tenants roamed the land and controlled the deals.  But to me, the focus on landlord financial wherewithall and the fact that the tables have turned more to a tenant wanting to know more about the financial stability of the landlord, rather than vice versa, really paints a picture of how things are today.  If leasing activity is gaining momentum it's a good sign for the investment sales part of our industry as occupancy will be up and values can be somewhat stabilized and more deals can start getting closed.  But, this appears to be just the start of what many hope will be continuous positive progress in the broad commercial real estate industry.

However, as Geof Dorhmann wrote in a recent editorial in The Institutional Real Estate Letter:  " Everyone seems to agree that the buying opportunity of a lifetime is approaching.  And everyone seems frustrated that that buying opportuinty hasn't yet materialized-at least, not in any meaningful way.  What we all forget is that it took almost four years during the previous time the markets really hit the wall before the financial system organized itself to efficiently disgorge its surplus real estate....To paraphrase former Treasury Secretary Larry Summers, there will be no billionaires created this time around.  But opportunities will benefit buyers and penalize holders of assets in the short term.  In the long term, at least from my perspective, everything is coming up roses."

Now, Geof has had a perch on the institutional real estate industry through a number of cycles and if you go back through the years of his editorials, he's been right more often than not.  I agree with his assessment of the current situation and while I don't think he's suggesting that it'll take four years this time, I believe that it'll clearly take at least two years for things to settle on a 'new normal' and that those that are positioned well, with the right expertise and the patience to wait for 'the right deal' will benefit the most.  In addition, when choosing firms with whom to invest, institutional investors, having learned some difficult lessons, will be that much more deliberate in making their manager selections, even to the extent of abandoning partially or completely some firms that have disappointed them, not only in performance but in the basics of client service and communications.  There are lessons to be learned by all of us and as things improve we need to remember to not forget them. 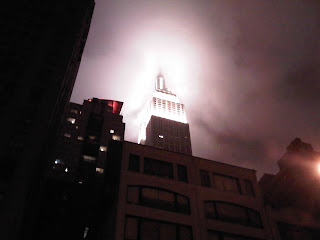 This is a very cool photo I took of the Empire State Building.  It's a pure shot taken with my Blackberry camera, unretouched, un-Photoshopped, un-anythinged.  The glow is almost heavenly and while the light is man-made, it has Mother Nature's mark all over it.  What it reminds me is of a saying I discovered recently:  "Even on a heavily overcast day, the sun is still there on the other side of the clouds."

Music of the week:  Shannon Corey.
I bought a Yamaha digital piano from her last year and last night was the first time I've seen her perform in person.  It was a great show.  But check her out for yourself.

Thanks to those of you who wrote me about my OTR last week "In memory of Sherwood."  I have to admit that once I write one of these I rarely remember what I wrote from week to week and don't go back and look into the archives.  But last week, to my surprise, my column was picked up and published by Europe Real Estate and I opened it up and read it.  It was like I was reading it for the first time and it touched me too!


These are my views and not that of my employer.
Posted by Steve Felix at 1:27 PM 1 comment: