A bunch (40+) of us met up for a holiday drink on Monday night at the Russian Vodka Room in New York. We missed those of you who were not in town or chose to go to other 'parties' (which I've heard were not as much fun as our get-together!)  While everybody there was in the commercial/institutional real estate world, the wonderful thing about the group was the diversity in both in generation and speciality. At one point, I stood in a place where I could see the whole group....everyone was talking with each other; my role was simply to make sure that those who came who didn't know anyone else got introduced. It was very cool and it was great to see all of you and toast the holidays and approaching start of a new year.


This week, on two separate occasions, the subject of networking came up in conversations with friends.  (Note:  we we're talking about 'face2face" networking vs. Internet or social media networking which may be a subject for another week).  "I'm not a good networker.  I'm really pretty shy," said one.  "When I'm at an event people are too cliquy and it's hard to break in."  I would guess that while we might not all classify ourselves as shy, we can all probably relate.  I have attended some conferences in my life where, while I consider myself a pretty friendly guy, it was impossible to get anyone to talk with me or to break into any group conversation.  One shouldn't have to feel that they have to push their way into a conversation; those people in the conversation should welcome someone new, and showing courtesy, invite them in.  Because of experiences I had when I was younger I'm very conscious of it.  I guess I've become sort of a natural networker but it's definitely easier for me as, at this stage in my career, because generally I know a bunch of people, which, while it sort of violates one of the rules below, I use to introduce people who don't know each other and then often leave them to talk.  But I recently attended an event where I didn't know hardly anyone and I had to take a deep breath and think about how I would approach the introducing of myself to them.  And remember, it's an individual thing, based on your personality and style. I've collected some 'formal' advice on the subject. Here are a few things that stand out to me:


Given the state of affairs in the world today got me thinking about a quote from the famous economist, John Maynard Keynes:  "The day is not far off when the economic problem will take the back seat where it belongs, and the arena of the heart and the head will be occupied or reoccupied, by our real problems — the problems of life and of human relations and of creation and behavior"  (1945)


Walt Sutton: Many years ago Walt and I sat next to each other on a cross-country flight.  He was typing away madly on his computer and we started chatting.  After that I bought his book, "Leap of Strength."  I thought of him today when I purchased copies for two colleagues as Christmas presents.  Then poked around Walt's website.  He's an interesting guy and someone you may want to consider as a speaker at one of your events. 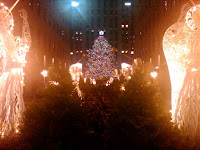 Photo:  Rockefeller Center, 6am, December 11, 2011 (New York is such a special place to be at all times but especially around this time of year!)


Happy holidays and my best wishes for a healthy and prosperous 2012!

Posted by Steve Felix at 2:31 AM No comments: