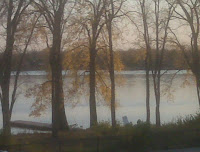 This week's institutional real estate world phrases that are being heard most often are:
1. Valuation
2. Sale of Secondary Interests
3. Potential LP default
4. Denominator
5. Unfunded commitment
6. No new money will be put out until 2010

As far as the overall commercial real estate market, well, I guess for there to be a market there need to be transactions which, for the most part, have taken a sabbatical. But for flavor I'll give you the headlines from the October Capital Trends Monthly from RCA:

1. Industrial Slowdown not as Heavy—Yet. Early October weakness hits
ahead of global trade downturn
2. Retail: No Shopper’s Paradise. Retail investors and consumers alike are guarding
their money, spelling trouble for sellers
3. Office: Amid Banking Fiasco, Ofﬁce Sales Worst in Years. One pressured seller makes up 30% of Q3 sales
4. Apartments: Is This Door Closing Too? Apartments have lost the least ground
this year, but that could be changing

So, we're really feeling the stress throughout our industry. But, as I've said before, these are also times for opportunity and those that have the capital, the savvy and the nerve are starting to see more and more distressed situations. And, unfortunately, as 2008 creeps to it's end, while there are great hopes for America with our President-elect energizing the population, 2009 is going to be a very, very tough one.

This week's photo is the view from my home office in Montreal, well, actually Ste. Dorothee which is just across the river from the island of Montreal. The leaves have almost all fallen now and the vista is more stark but I find it actually more beautiful than during the summer. There are no jet-ski's whining, no boaters, just the river flowing and some remaining ducks who are challenging the potential sudden slap of real winter. The first Halloween in our new neighborhood was really something. There were so many kids and their parents dressed up and walking the street; you would have thought it was an organized parade. We were going out for dinner but we left a big bowl of candy on a table at the foot of our driveway (marked by two candles) as we didn't want people ringing the doorbell and driving the dogs nuts. But I think, next year, we'll also get into costume and be there to greet the trick or treaters personally. It was reassuring to see the celebrating of Haloween still lives in the families on our block in particular. It's a sign to me that society has not lost it's way completely.

The exciting election of Barack Obama this week was living history. And his speech was both brilliantly written and inspirationally delivered. In watching John McCain speak that night I almost got the feeling that he was relieved that it was over and that he didn't have to take on the challenges facing the next president of the U.S. We have so many problems to tackle and they all demand simultaneous attention, energy and money. It's like a big workout deal, a very big one and I guess, until you get inside and see what's what, you can't wave a magic wand and, voila, everything will be better. But something special is happening in the U.S. Do you know what it is Mr. Jones? It's a movement, it's the taking of ownership of the future by people, no matter from what generation, to change things. Of course, if you ask ten people what they want to change, they may all have different things and that's okay. But Obama, in brining back, for the first time since JFK, the spirit of volunteerism and the belief that, "Yes We Can" he has injected a belief of hope that things can turn around and it's much, much deeper than the financial crisis: it's about the quality of people's lives. And what more can you hand off to the next generation than the opportunity that anyone can achieve anything if they know, "Yes I Can." The world is on our side. The world needs the U.S. to be strong. The world wants to respect the U.S. And we have shown the world that we respect ourselves. Now it's up to us, not to talk about things, but 'be the change we want to see in the world.' We won't get a second chance, this is it and I know that we as a nation and as a global society are up to the challenge as long as we are willing to participate.

"Studs Terkel, Listener to Americans, Dies at 96" was a headline in last weekend's NY Times. I can't imagine that Studs would have liked to be called anything better than 'listener.'"Mr. Terkel succeeded as an interviewer in part because he believed most people had something to say worth hearing." So do I. Rather than 'talking or waiting to talk' how about we start spending some energy on listening. I have worked hard over the past 20 years to get myself to hold my tongue and let others talk. It's a challenge as I have so much to say that's important :-) but I can tell you that I have both gained a lot by keeping quiet at times and also, from what people tell me, developed a reputation for being a good listener. After all, we all like it when someone listens to what we're saying, right?

Thanks for reading my blog.
Many of you know that my life is built on people, on community, on collaboration and on sharing. This platform gives us all a chance to connect and reconnect. I am grateful for your support, suggestions and contributions. Thanks a lot.


Note: These are my personal views and not that of my employer. 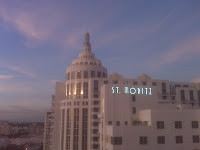 The South Beach section of Miami Beach has gotten a lot of attention as one of the most trendy beach and nitelife places in the world. The wonderful art deco architecture that has been preserved due to the foresight of the local authorities is the backdrop as you walk down Ocean Beach Drive after dark (ok, there are a lot of beautiful people spilling out of the restaurants and bars along this street too; it only adds to the experience). The photo on the left is the hotel next door to mine taken from my room. It's on Collins Ave. that there are so many of the classic hotels which have been preserved and upgraded.

I attended ULI's Fall Conference in Miami Beach this past week. There were 5,000 attendees across the full spectrum of disiplines involving real estate development (although very few investors).

Paul Volcker, former head of the Federal Reserve gave a terrific speech. Here are some takeaways:

1. There’s no doubt we’re in a recession, not just in the U.S.-it’ll be rather long before we get back to robust growth.
2. We have a crisis in our financial system-but, doesn’t ‘system’ imply some order?
3. We’re seeing and going to see government intervention beyond our imagination.
4. I’ve never seen anything or as complex as this situation.
5. We had a fancy financial system with ingenious ways of supporting capital needs with money coming from abroad.
6. Confidence and trust are the key issues
7. Even with all that the government is doing, people are still not confident
8. We’ve produced too few civil engineers and too many financial engineers

From Sam Zell’s ULI keynote about Latin America:
A. Transparency in Mexico for the first time is very important to new investment.
B. There is no greater issue in real estate than the issue of demand and the developed world has little in the way of new demand.
C. The developed world adjusted to the lack of demand by overleveraging.
D. Latin America, relatively speaking, will outperform the developed world.
E. This is the time that tries mens’ souls. This is the time that you find out if you have balls.
F. Brazil and Mexico are the only two places in Latin/South America where scale is achievable. If your goal is to build a world-class business you have to look to scalability.

My favorite ULI panel was the "Forecast Fight" moderated by NCREIF head, Doug Poutasse and including Bret Wilkerson of PPR, Jon Southard of Torto Wheaton, Ken Rosen of Rosen Consulting and Sam Chandan of REIS.
1. It's all about the economy and credit markets; it's not about real estate.
2. Prediction: deep recession lasting 4-6 quarters; key will be the behavior and sentiment of consumers.
3 Cap rates are a bad measure of what is going on.
4. The three things wrong with retail today are: supply, demand and pricing :-)
5. 2008 is the first time in 15 years that the use of retail 'coupons' is up.
6. The shift in the global path of goods is impacting industrial real estate and ports.

Although I feel that we've had enough speakers and panelists talk about what caused the problems this panel did provide forecasts on rent, vacancy and absorption in the four major property types (U.S. only). However, in response to my question, "What is the sentiment of European institutional investors re: the U.S.?" the consensus was that the train had already left the station, values are a mystery and debt is rare and pricey and when you combine that with the fact that the Euro doesn't go as far as it did just a few months ago, there was no real encouragement that European investors would be taking significant positions in the U.S. right now.

Hopefully, going forward, panelists will talk about what they're planning to do, what are their fears, their expectations, etc. It's up to panel moderators and conference organizers to push panelists away from the drivel and into the dynamic kind of talk that they would have with a friend in a one-to-one conversation. After all, the panel to an audience has a one-to-one relationship as well, doesn't it?

My parents were staunch supporters of JFK and so I grew up in that kind of environment. On election night 1960, I stayed up as late as I was allowed but the final results didn't come in until the middle of the night. I woke up to find that a small sign I had made on a shirt cardboard saying, "Kennedy for President" was changed to "Kennedy is President." I was excited and happy. This time around even with what has gone on and what the polls say (who do they ask anyway?) I feel that it won't take until the middle of the night next week for us to learn who the next President of the United States will be. It will be another of those rare, world-changing events that have occured in our lifetimes (The Beatles, Video Games, The Internet, Sushi, Space Travel, Gay Marriages, X-treme Sports, the Phillies winning a World Series, Wireless, Handheld Computers, GPS......) that generations from now people will still be talking about. Every generation lives through these type things but I think we have had our fair share of biggies. On Tuesday night, I will be toasting to a brighter tomorrow for the United States and the world. There is much work to be done and we must start now. And as Johann Wolfgang Von Goethe (1749-1832) stated in one of my favorite quotes, "Whatever you dream you can do, or believe you can, begin it. Boldness has genius, power and magic in it." BTW, this quote is for us as individuals as well as for our world leaders.

Thanks for reading my blog.
Many of you know that my life is built on people, on community, on collaboration and on sharing. This platform gives us all a chance to connect and reconnect. I am grateful for your support, suggestions and contributions. Thanks a lot.


Note: These are my personal views and not that of my employer.
Posted by Steve Felix at 5:39 PM No comments: