On the Road....On the High Line 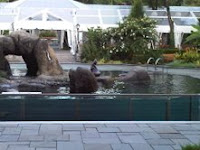 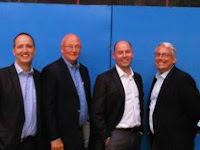 Photo Left (l-r): Simon Fairchild, new Managing Director-North America, IPD; Wylie Greig, Senior Advisor, IPD; Simon Mallinson, outgoing Managing Direct0r-North America, IPD (starting with INVESCO in London shortly); Bob White, Founder and President, RCA. Photo taken on the "Highline." The High Line is located on Manhattan's West Side. It runs from Gansevoort Street in the Meatpacking District to 34th Street, between 10th & 11th Avenues. Section 1 of the High Line, which opened to the public on June 9, 2009, runs from Gansevoort Street to 20th Street. The High Line was originally constructed in the 1930s, to lift dangerous freight trains off Manhattan's streets. When all sections are complete, the High Line will be a mile-and-a-half-long elevated park, running through the West Side neighborhoods of the Meatpacking District, West Chelsea and Clinton/Hell's Kitchen. It features an integrated landscape combining meandering concrete pathways with naturalistic plantings. Fixed and movable seating, lighting, and special features are also included in the park. (NOTE: It is very cool, particularly at night).

I was privileged to be invited to join Bob, Simon, Simon and Wylie last night for dinner. These guys are some of the most knowledgeable real estate people in the industry. Wylie reminded us that some of the negative consumer indicators of how an economy is doing are sales at: dry cleaners (not so often), shoe repair (rather than buying new shoes), car washes (it doesn't hurt a car to be dirty). All these businesses are suffering in the U.S. None of the group feels that we are 'out of the woods' at all. Amongst a lot of us in the industry, the problems with regional banks in their commercial real estate loan portfolios will be the other shoe to drop, assuming that the shoe that has already dropped stays put and doesn't stomp again. However, Bob did say that there are some glimmers of hope but not more than glimmers. What we need is a bright shiny star or a white knight or The Lone Ranger. But, those are fantasies and we live in a real (estate) world which is all too real.

Photo top right: Either Scooter or April, California Sea Lions in residence in New York's Central Park Zoo. Many mornings on my walk to the office I stop to watch these guys swimming around, relaxing and enjoying the early morning before a day of performing and eating fish. They glide through and on the water and just seem to be having the times of their lives.

I had a simply wonderful purchase/customer service experience this week. McKinley Leathercrafters came up on a Google search for a binder cover. Although you can order through their website I called as I had a special request. A woman named Tiffany answered and proceeded to ask me all the right questions and make all the right suggestions for my binder cover, which they make by hand right at their place. There are six people working there. Only two, Tiffany and the owner, answer calls. All are involved in fabricating the finished product. Yes, it's a small business but it reminded me of how important and pleasant, at least to me, personal customer service is, and how few companies even provide it anymore. What customer service experience do your clients and prospective clients have when they contact your firm? How often do you stay in touch with them? Do you ever ask them how they like to be communicated with? While it's always important, I believe, now, more than ever before in our industry, client service, communication and simply paying attention to your clients is paramount. If you are looking for anything in leather I highly recommend McKinley Leathercrafters.

Beginning with next week's OTR, I'm going to be speaking with people who were involved during the RTC days and are still involved in the industry today and ask them: "What are the differences between now and then." If you have that dual experience please feel free to email me with your answer to that question. I will identify respondents only by job type (then and now) unless you'd like to see your name in print! I think it'll be interesting.

Also this week I had a sitdown with JC Goldenstein, Founder of CREOPoint.com. From their website, "CREOPoint.com is the global commercial real estate 24/7 meeting point where you'll find the latest industry news, a vibrant community with worldwide networking opportunities, deals, white papers, best practices, search, forums, event calendar, videos and career development opportunities." During 2009, CREOPoint has established synergistic relationships with a number of industry organizations and publications and from what JC told me, there are going to be some very cool sounding enhancements in the near future. While our industry has not been the most willing and active participants in 'online networking' it seems to me that as things change in front of our very eyes and resources become more scarce, a platform like CREOPoint can become a more and more important and useful vehicle for us.

On Thursday, Reutersrealestate.com published some thoughts from Russell Platt, founder and CEO of Forum Partners. I thought you'd be interested in seeing Russell's ideas:


Have a safe and fun Labor Day weekend you guys!

These are my views and not that of my employer.
Posted by Steve Felix at 9:31 AM 1 comment: