In memory of Sherwood

My middle name is Sherwood.  It was given to me as a memorial of sorts to a second cousin that I never met.  All I know about Sherwood is that he was from , had a brother named and died during WWII when he was probably no older than 20.  He was a bomb specialist and died when a mine he was trying to disarm blew him up.  What a way to die.  But what got me thinking about him this week was the upcoming Memorial Day weekend.  , like many young men, enlisted in the Army after the Japanese decimated .  And, like my Dad, Sherwood and millions of other young men and women answered the call of “Uncle Sam Wants You.”  But what I was really thinking about while walking to work yesterday was how much and so many of his generation missed.  They missed Elvis, The Beatles, a man walking on the moon, the Internet, Skype.  But they missed a lot more.  They missed a chance to grow up, to experience life, to realize their dreams.  They missed being a parent, watching your child grow up and experience their own lives and realize their own dreams.  Tens of thousands of my peers died during the Vietnam war; countless others were injured either physically or mentally (those who don’t have a holiday reminding people of their sacrifice).  So, this Monday, no matter what is going on in your life, whether it be financial stress, career related uncertainty, some pain in your shoulder that you’ve never had before and you don’t know where it could have come from, someone taking ‘your’ parking space (right in front of your very eyes), unexpected rain on a day you were planning a picnic or your flight getting delayed or cancelled.  Take a minute to think about how minor these things are in the context of the much bigger picture of life.  Appreciate all that you have rather than all you want to have and think about all the Sherwoods and others in your own family who never had a chance to kiss their child good night and have them ask, “Dad, where does the sun go at night?” or appreciate the beauty of Mother Nature on a walk through the park or to listen to  music that gets to you or watching a movie that moves you to tears.  Think about all the little things.  Those things that we all tend to take for granted because the sum of those little things is what life and dreams are all about. 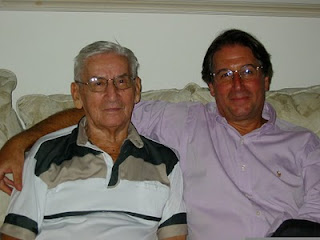 A friend who I've never met writes a blog on Simplicity.  This is something he posted this week:
The Starfish Story

One day a young was walking along the beach when he noticed an old man picking something up and gently throwing it into the ocean. Approaching the old man, he asked,“What are you doing?”

The old man replied, “Throwing starfish back into the ocean. The surf is up and the tide is going out. The sun is shining. If I don’t throw them back, they’ll die.”

The young man said, “Don’t you realize there are hundreds of miles of beach and thousands of starfish? - You can’t make a difference!”
After listening politely, the old man bent down, picked up another starfish, and threw it back into the surf.

Then, smiling at the young man, he said...

“I made a difference for that one.”
Movie of the week (tissues recommended):  As It Is in Heaven

These are my views and not that of my employer.
Posted by Steve Felix at 7:48 AM No comments: