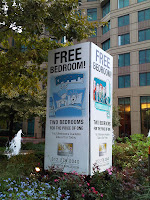 Talking this with a top-tier investment sales executive:

2. Deals are not as large (i.e. portfolio transactions and mega-deals).

4. Most important: buyers and sellers seem to be finding more of a common ground on which to negotiate deals, i.e. the value of the property

This truly sounds like a sign that we've all been waiting for. However, the caution is that debt is still very dear and the banks that are lending are not making it easy (it was easy for too long). But given that parties seem to be finding a way to reach a 'price' in more situations than over the past almost two years we may be slowly creeping back into business. And we also have a long way to go.


Those of you who have been reading my column over the years know that I regularly pull stuff from various reports by RCA (Real Capital Analytics). I believe it is universally agreed throughout the commercial real estate world that RCA is hands down the most reliable and well-respected source for data and analysis on commercial real estate transactions, capital trends and now the distressed asset universe. At investor conferences, industry seminars, conventions and trade association meetings there are always some charts from RCA included. I am fortunate to be a FoRCA (Friend of RCA) and have, from the beginning been an ardent supporter. Bob White, RCA’s founder is both a frequent and insightful participant on panels and delivering keynote addresses. Part of the reason for RCA’s success and respect in the industry comes from Bob’s passion that has rubbed off on everyone in the firm. As the industry evolves it’s good to know that there’s a friendly, accurate and passionate firm collecting and analyzing the data that is the foundation of so many commercial real estate transactions and financings. If you’re in NYC I am pretty sure RCA would enjoy having you visit their funky offices and if you’re lucky enough to be in the city on a day when they have one of their famous rooftop parties, well, you’ll be in for a real treat.


And now, with that introduction, here are a few things I picked our of RCA’s just released August (Mid-Year Review) Global Capital Trends:

1. Resurgence in Transactions Underway: The increase in Q2 is a positive sign that appears to be turning into a solid trend as transactions in Q3 are projected to rise further.

2. The volume of troubled properties in default, foreclosure or bankruptcy continues to mount now totaling more than $233Bn globally.

3. In the Americas, recovery is stretching into more of an L-shape as compared with other zones.

4. Distress is mountainous in the Americas and appears to be rocketing higher and faster than anywhere else in the world.

c. Retail: Sheffield, UK (I believe this is where Joe Cocker is from)

Of course, contained in this 24-page report is substantial detail and supporting data, charts and all kinds of useful things.


Driving into a midwestern city last night from the airport. The taxi driver said the traffic was heavier than usual for that time. The reason: The Jonas Brothers were performing. We passed by hundreds of cars lined up to get into a parking lot. A good number of them had messages painted on their windows "Jonas Brothers We Love You" and the like. Teen or probably pre-teen girls were hanging out of the windows of cars (most likely driven by their parents) whooping it up, waving and just so happy to be seeing their heartthrobs perform. It was really exciting to see their excitement and while I couldn't guess a Jonas Brothers tune if I was given only one to choose from, I'm assuming that they are deserving of the innocent mania exhibited by their fans. Somebody told me that they're today's 'Bubble Gum" band (i.e. The 1910 Fruitgum Company in which the bass player from my first band toured, etc.). I guess that in a world suffering from deaths from war, famine and slow demise caused by losing one's job, losing one's home and seeing a planned retirement go up in smoke it's good that the Jonas' exist. They're probably good musicians and have written catchy songs but they're providing something that belongs to their fans just like our early bands The Dave Clark Five, Herman's Hermits, The Animals, The Stones and The Beatles gave to our generation; the chance to scream our lungs out (at least the girls), cry when they found out Paul had gotten married (and now Kevin Jonas recently announcing his engagement) and have something to attach ourselves to that had no connection to our parents or our parents generation. It was fun to see them and I'm sure the Bros. put on a great show and their fans got to forget about life for a while.


On Route 46 in Little Falls, NJ there’s a roadhouse tavern called “Great Notch” whose sign I’ve seen for a good many years. I had never been in the place until last weekend when some friends of mine were playing there. These friends included a guitarist named Lee Fink. I had the privilege of playing in a real good rock and blues band with Lee for several years in the mid 1990’s and while getting home really late with my clothes smelling from smoke was not fun, closing my eyes and just listening to Lee play kept me coming back night after night. I hadn’t heard him play for a few years before last Saturday night and found myself, in this tiny place where the band is eight feet from the bar closing my eyes again and listening to a true master, a guitarist I would put up against anyone, including God himself, Eric Clapton. The band does not have a keyboard player and there is a chance that I’ll be invited to sit in with them in the future which is something about which I’ll have to manage my expectations as sharing the stage with Lee (and the rest of the band are no slouches either) would be very special for me. One more thing about ‘Great Notch’: you can’t tell a book by it’s cover. Maybe you’ve driven or walked by some type of establishment where you’ve never been before and one day you decide to open the door and check it out and find yourself pleasantly surprised (This happened recently in Austin, Texas when one of my travelling partners said, “Hey let’s go in here” and we walked into the side door of a club and on the stage was 95 year old pianist, Delta Blues legend Pinetop Perkins, playing with the house band). All I'm suggesting is: Be willing to explore…sometimes the results are memorable and priceless.


Over the years I have had a habit of thinking of names for bands. I'll say something or hear someone else say something and I'll go "That's a good name for a band." Of course, most of them weren't but a few were. Recently I came up with a name that I like, "The Middle Eight." As many of you who play or are into music know, the middle eight is like the bridge of a song. So you have a verse, a chorus and then the middle eight. Paul McCartney and John Lennon it's said were good at adding a middle eight to each other’s original songs and it's this part that sometimes just takes a song from being average to something special. But early this morning I got to thinking that there's a middle eight in business as well. Here's my thinking: to be successful a company with a product or service has to come up with the idea/plan/product (The Verse). Then, they look to the end, where this Verse is going to get them (The Chorus). But, if they use The Reverse Solution Approach, where you put yourself at the spot of your goal/objective and look back and see what had to happen, what had to fall into place, for this to be successful...and then you just do those things (The Middle Eight) and it may just be that this Middle Eight stuff is the most important. Execution of a plan is what differentiates ideas from successes. Anyway, now that I've thought of this idea, maybe I'll take it further and write an actually write a white paper (The Middle Eight) and then try to turn it into a book and then make appearances on TV and grow it into something like what Tony Robbins has done. Or maybe I'll just be happy that I thought of it and smile to myself and then focus on my day job.


Service with a capital "S": We checked into a nice Chicago hotel this week and were told that the passenger elevators had just gone down. We were escorted to the freight elevators (i.e. given the rock star treatment...sans groupies!). It was a little complicated getting to our rooms but what was really impressive was the hotel had called in a good number of their staff during this situation and staff members were virtually everywhere you turned. Not only did you feel safe but also you felt like they really cared about you as a customer/guest. Good management (and staff) rises to the occasion no matter what business you're in. The "we'll do what needs to be done" attitude starts at the top and, with the case of the Park Hyatt hotel in Chicago, their team is tops in my book.


Final item: Wouldn't it be interesting to be a fly on the wall listening to what colleagues say to each other after a multi-person meeting has concluded and the other participants have left? I observed this this morning at breakfast at the hotel and while I couldn't hear what they were saying it gave me this idea. Fun eh?


Photo: How to Sell Condos (Chicago): The graphics are worth enlarging.


Words of the week (perhaps apropos of society today):

Panglossian: characterized by or given to extreme optimism, esp. in the face of unrelieved hardship or adversity. Origin: 1825–35; after Pangloss, an optimistic character in Voltaire's Candide


These are my views and not that of my employer.
Posted by Steve Felix at 6:16 AM 3 comments: