On the road in London

I've been in London this week and had what I believe will be a life-changing experience.  I learned how to play Croquet.  Not only did I learn but a couple of days later, paired with a great player and colleague, Alex Rigby, one a sports day Croquet tournament hosted by CBRE.  I guess the reason I am now hooked on the game is that I seemed to have taken to it pretty quickly.  While my partner gets total credit for all the strategic playing (and there's a lot of it) I can honestly say that I followed his instructions pretty darn well (actually I think Alex would agree).  It seemed as if I might have been born with a croquet mallet in my hands.  Anyway, I'm going to see if I can see up something on my lawn.  It's really fun and can be both social and cut-throat depending on the level of play but winning doesn't make you a bad person.

Great story:  There are these three English guys who had been sitting around their local pub for years looking at their pints and saying, "We can do better than this."  Finally, on a dare, they went ahead, bought some brewery equipment, signed a lease and went into business.  Although none of them has given up their 'day jobs' this year they hired some full-time people work the place.  The result, Langham Brewery whose brews are both award-winning and have some great names (Hip-Hop, Halfway to Heaven, LSD (Langham Special Draught in case there were any questions).  While supplying pubs and a supermarket chain, they are open to the public and are situated in a beautiful part of the English countryside in West Sussex.  If you're in the neighborhood, stop by and if you have friends living or visiting the UK please tell them about it.  It's good stuff and a special experience.

Big companies spend big money on outside consultants some of whom refer to themselves as 'gurus.'  I've read some books by supposed gurus who merely steal ideas from others and repackage them or give them a catchy name.  The scary part of all this is when people in the audience walk away and immediately start to implement changes-sometimes simply for the sake of change.  I wonder if the gurus warn people of the potential consequences of quick change or maybe they see more business from that client after things get even more screwed up when their suggested changes are adopted.

A voice that myself and millions of other baseball fans who had visited Yankee Stadium grew up with was silenced this week.  As Yankee Stadium's public-address announcer from 1951 until 2007 Bob Sheppard became one of the major figures in Yankees history without ever having come to bat or thrown a pitch. He died Sunday morning at his home on Long Island. He was 99.  He was a class act. 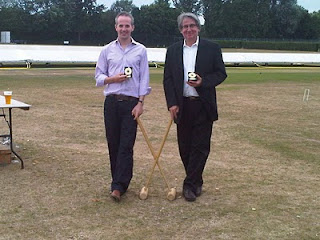 Alex and Steve after winning the Croquet Tournament.


These are my views and not that of my employer.
Posted by Steve Felix at 6:01 PM No comments: