Jacques Gordon: Commercial Real Estate Industry "Legend" - someone who has made a difference!

Jacque's bio from LaSalle.com
Jacques leads LaSalle’s Research & Strategy team and is responsible for analyzing capital markets, economies and properties around the world.  He serves on the firm’s Global Management Committee and the Investment Committees for Asia Pacific and North America.  Jacques also chaired the Global Research Board of JLL and teaches International Real Estate at Kellogg School of Business, Northwestern University.

Jacques was previously a research economist at the Urban Institute an economics policy research think tank, not a member organization like ULI…often confused. In 2000, he received the Graaskamp Award from the Pension Real Estate Association (PREA) for his contribution to institutional investment research and strategy.  Jacques has a PhD from the Massachusetts Institute of Technology, an MSc from the London School of Economics and a BA from the University of Pennsylvania.

Jacques and I first met on the industry conference circuit.  I discovered he was a regular reader of this column. Jacques would write me, from time to time, both with compliments and also much appreciated suggestions.  Jacques is a master presenter and one of only a handful of what I’ve referred to as “Research & Strategy Superstars” of the commercial / institutional real estate industry.  Having seen Jacques lead the presentation of LaSalle’s Investment Strategy Annual I can personally attest to his passion about the industry and what he does.

A number of years ago, he and I found each other on the same flight to a real estate industry meeting in Chapel Hill, North Carolina. Jacques had rented a car and offered me a ride to the hotel.  We got in the car and were following our noses to the University. Then we got to talking – and got totally lost.  But, agreed that as a couple of real estate mavens, we would keep that a secret from the students we were about to meet at UNC…and that we would “enjoy the journey” by observing the amazing growth corridors between Raleigh, Chapel Hill and Durham…the famous “Research Triangle”.

Q. How did you get started in the commercial real estate industry?

A. I was finishing a PhD dissertation, but wasn’t quite done. My wife was accepted to The University of Chicago for her own doctoral program. So, I had to get on the ball and earn some income while I was “ABD” (All But Dissertation).  I went to work for RERC (Real Estate Research Corporation) in Chicago in 1985 and got hooked on doing applied market analysis for real estate.  Having interviewed developers like Ernie Hahn and Jim Rouse as a case-writer for MIT’s new Masters of Science in Real Estate, I knew that commercial real estate was a pretty interesting field.  I had done a detailed study of private re-investment in Boston’s neighborhoods as part of a Boston Redevelopment Authority grant. I found out two things:  1) The life of an academic was not for me and 2) Investors and developers needed a foundation of strong research in order to be successful.

Q. What one piece of advice do you have for people just starting out or early in their commercial real estate career?

A. Commercial real estate is a team sport.  Find a team you like and get on it.  Figure out what your value-add to the team might be and get in there and play!

Q. Is there anything you wish you had done differently in your career? If so, what?

A. I was aiming for an academic career and took a very different path, compared to my MIT classmates.  I sometimes wonder what it would have been like to be a full-time academic.  Recently, I have been teaching at the Kellogg School of Management part-time, and I am still working closely with clients and colleagues on very interesting research projects, so no regrets.

Q.  Who has most influenced your career and why?
Bill Wheaton and Ken Rosen taught me how to apply urban and regional economic theory to the ever-changing streams of commercial and residential real estate data.

Lynn Thurber guided me to make sure that research always answered the “So what?” question. In other words, all of our charts and graphs are not worth very much, unless they shed light on what actions investors should take.

With the kind permission of RCA (Real Capital Analytics) here are some of the highlights of their recent U.S. Capital Trends report:


(Steve's comment):  While our industry continues to work at a fever pitch, especially these last couple of weeks at the end of the year, one continues to wonder:  When do things change?  Downturn (I'm not really a fan of the word - but something's got to give, right?  It's just a matter of when).  I was part of a conversation a couple of years ago at a NAREIM (National Association of Real Estate Investment Managers) where senior industry executives were asked to share what they're doing to prepare for the next 'shift' that was different than the last time.  It's probably no surprise that a lot of firms were caught off-guard in 2008.  One of the most interesting comments was from a CEO who said that they were creating a plan to 'retrain' or 'transfer' people within their firm, like from Acquisitions - when that slows to a halt - into Asset Management, for example. I mentioned I thought it was smart given that some real estate investment managers were criticized by their investors when they laid off people as activity declined. In everything in business and life there are lessons to be learned.  The important thing is to remember those lessons and do our best to not repeat the mistakes again.

Some terrific views from offices I visited in Chicago on Wednesday 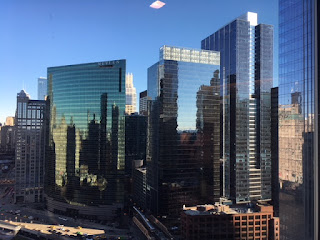 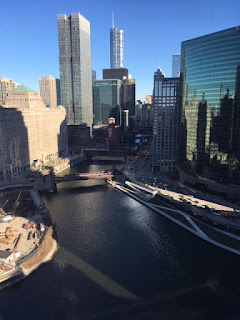 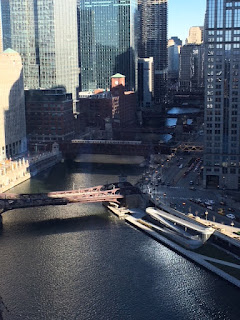 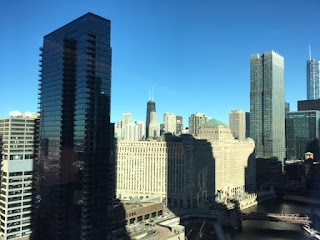 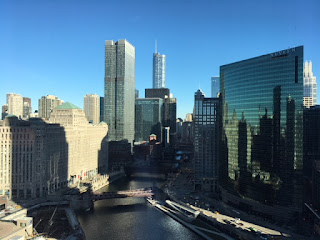