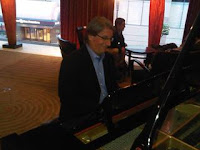 So now I'm really confused. A top New York residential broker told me this week that the New York City residential market is either at the bottom or just a smidge away. Residential real estate is not my bag and so I defer to the experts. But in addition this broker is closing deals, on expensive apartments, at deep discounts, with all-cash buyers. So, in that type of transaction it's not the capital (like what's preventing the commercial transactions from their resurgence) but it is the value or should I say the discount (which of course is the other missing link in commercial real estate transactions...what is the right price to sell or buy at). But any promising news about the economy and in particular the real estate industry is a light, albeit possibly a dim one, that may be at the end of the tunnel. But as we all know, we'll only know when we've hit the bottom after we've hit it and can look back and say, 'Yup, that sure was the bottom of the market.'

Tuesday night my son and I went to the 'new' Yankee Stadium for the first time. Standing outside before the game brought back some great memories of the 'old' Yankee Stadium which is still standing right across the street shrouded in demolition netting. It's very sad and somewhat dumb as I believe the only reason the new stadium was built was based on greed as a function of the number of 'suites' that could be added. On the #4 train you get a very brief glimpse into the old stadium and it looks like something that used to be loved but has been abandoned. The field is ripped up instead of being the beautiful green turf that it once was. But it looks like in a flash Mickey Mantle, Tom Tresh, Clete Boyer and Moose Skowron could be jogging out of the dugout to take their respective positions. One other thing bothered me about the new stadium (besides a small bottle of water for $5.00): they built it on 'my field.' Let me explain. When I was in college I was a pitcher. We had a terrible team or at least terrible records: 3-21 and 4-17 in my two years. But I did win one game. It was a shutout of CCNY (City College of New York) on their homefield (in the shadows of Yankee Stadium and now covered up by the new stadium). It was a 2-0 shutout; the first time they had been shutout on their home field in a long time. There was a little piece in the NYTimes the next day "Felix Shuts Out CCNY 2-0 on a Six-hitter." I believe still have that clipping. But that field is gone and in a very weird political situation (are there any other kind these days in particular?) the plan to put a park on the site of the old stadium is stalled partially due to a debate over whether the home plate of the main field to be built needs to be in exactly the same place as the home plate of the old stadium. Some locals want to make sure that the stadium is not totally erased similar to what happened when Ebbetts Field (former home of the Brooklyn Dodgers) and The Polo Grounds (NY Giants) were razed for apartment projects. The sad part to me is that a perfectly good stadium is going to be demolished in favor of a new one which not only costs the taxpayers a lot of money, but also puts a lot of money into the pockets of the owners of the team. However, I have a funny feeling that the Yankee owners (one of which is a former boss of mine) may have outsmarted themselves with the prices that they're charging for everything and the elite setup of a number of 'clubs' within the stadium which require membership above and beyond just the price of tickets (which go up to $2500 per seat per game!). Greed kills; it kills deals, it kills friendships and it kills business relationships. It's an ugly character trait and one which has become all to present in our lifetimes. Perhaps this economic turmoil we're experiencing will have a good effect in the end in that some humility will replace greed. But I don't really believe that and I think we're already seeing signs of the return of greed at certain levels of the work force while more and more Americans struggle, like they never have before, to keep a roof over their family's head and food on the table. The have vs. have-not syndrome is alive and well but it's not a healthy ratio. Hopefully, someone will wake up and realize that the majority of citizens are the ones that should be paid attention to and not the thin minority that play at lofty heights and whose economic disruption has been the release of a nanny or giving up the $45,000 per year private grammar school.

Something new I learned about this week: Area 51.
Have you ever heard of this? Area 51 is a nickname for a military base that is located in the southern portion of Nevada 83 miles north-northwest of downtown Las Vegas. Situated at its center, on the southern shore of Groom Lake, is a large secretive military airfield. The base's primary purpose is to support development and testing of experimental aircraft and weapons systems.[Other names used for the facility include Dreamland, Paradise Ranch, Home Base, Watertown Strip, Groom Lake and most recently Homey Airport. The intense secrecy surrounding the base, the very existence of which the U.S. government barely acknowledges, has made it the frequent subject of conspiracy theories and a central component to unidentified flying object (UFO) folklore.

Once again, real life is better than the movies. Oh, one other thing: The Las Vegas minor league baseball team is called....you guessed it: The Las Vegas 51's!

These are my thoughts and not that of my employer.
Posted by Steve Felix at 7:23 PM 1 comment: