Is past behavior an indication of future behavior?


If there was any question in anyone's mind about how difficult it is to raise institutional capital for real estate private equity funds my conversations with industry leaders at the PREA conference this week left no doubt.  It does appear that many institutional investors feel that they are three-quarters of the way there in dealing with legacy issues and while some investors are starting to put new money out, albeit the bulk of it to managers with which they have an existing relationship, the sentiment seemed more positive than in quite a while.  The way investors are going to underwrite managers going forward is also interesting, although not the least bit surprising.  Key will be performance, the manager's discipline during the downturn,  their communication with their LP's.  It also sounds like there will be more and more focus on what is to me the essence of the real estate industry, the people.  We all want to believe we know what type of people we're doing business with and about the organization as a whole.  I thought something that someone said on this subject was particularly poignant:  "How can you underwrite how people behave when they're backed into a corner?"
I personally experienced this when I was running a large RTC contractor office in the early 1990's and we were dealing with a lot of defaulted borrowers (formerly known to the banks as 'customers').  While the disclaimer "Past performance is not necessarily indicative of future results" is plastered all over investment prospectuses, I wonder, given human behavior, if a person's past behavior is truly indicative of their future behavior.  People can learn from their mistakes but as we are witnessing in many ways in the U.S. now, political, economic and business it seems like there's an awful lot of people behaving in ways that got them into trouble (and caused problems for many Americans) all over again.  I guess we'll just have to watch and wait to see what happens.
Leadership:
This is an excerpt from an interview with a CEO which I found enlightening.  I hope you do too:
"At the risk of oversimplifying you find at least four personalities, and you never find all four of those personalities in a single person.
You very rarely find more than two of those personalities in one person. I’ve never seen it. And really great teams are where you have a group of people who provide those functions and who respect each other and, equally importantly, both know who they are and who they are not. Often, I’ve seen people get into trouble when they think they’re the strategist and they’re not, or they think they’re the decision maker and they’re not.
You need a degree of humility and self-awareness. Really great teams have team members who know who they are and who they’re not, and they know when to get out of the way and let the other team members make their contribution."
The Deal World:  RCA reported this week that they are seeing marked improvements in the availability and terms of commercial real estate mortgage credit. Other characteristics are noticeably relaxed loan-to-value targets, unsecured facilities, acquisition lines, CMBS securities and even construction financing. RCA also points out that deal activity illustrates the diversity of lenders in the market as well as the attractive rates.  These are very good signs for the industry, although as history shows us it's when commercial real estate lending gets too competitive that underwriting standards deteriorate.  Oh well, it's just another cycle in the on-going saga of commercial real estate.  Will it end up looking like the rest or will it be different? Only time will tell.  But, while discipline doesn't seem to be a very important word any longer in 'real life' maybe it will become more important in 'real estate' as we've already lived through, and are still suffering the consequences of lack of discipline. 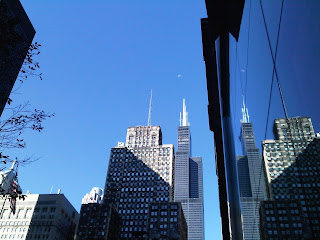 Photo:  Moon over the Sears Tower, Chicago
A friend sent me this amazing photo essay that is of particular interest to us real estate types.  http://www.boston.com/bigpicture/2010/09/human_landscapes_in_sw_florida.html.
On the road....
Oct. 11-21:  Gotham
Oct. 26-27:  The City So Nice, They Named It Twice (PERE New York Forum)
Nov. 5:  The City of the Big Shoulders
Dec. 8:  Mainhattan (no typo)  (INREV Committee Meetings)
These are my views and not that of my employer.
Posted by Steve Felix at 7:46 AM No comments: