From all I see and hear, the commercial/institutional real estate industry is doing its darnedest to find a place that resembles 'normal.' This week in New York was "REIT Week" as NAREIT (National Association of Real Estate Investment Trusts) has one of their two major events and basically the REIT industry converges on the historic Waldorf Astoria hotel, which really has outgrown it's functionality for an event like this. I didn't formally attend the event but did meet someone the other evening for a drink and ran into some REIT-types who were attending. I've never really gone to any events where I wasn't registered, just to loiter in the lobby and pick people off but I love being an observer and there was a lot of frenetic energy on display. Talking with a friend who is a REIT analyst, he said that it was amazing to him as to how upbeat everyone was, sort of a reinforcement of my idea that we are just an optimistic industry and trying to put things behind us.
Last Friday, workers at the Central Park Zoo euthanized one of its most popular and beloved residents: Ida, a 25-year-old polar bear who had suffered from liver disease. It was a painful moment for her keepers, who were given time with her before she was put down.  But Ida also left behind Gus, her companion for 24 years. Now, Gus, the zoo’s only other polar bear, is alone.  They’re monitoring Gus closely for signs of depression.  The photo accompanying the article, which was taken in 2002, is very sweet (see below).
The Monkees was a TV show in the mid-1960’s.  It was a goofy show about a make-believe band.  Donny (as his friends called him) Kirshner aka “The Man With The Golden Ear” was hired by the shows producers to deliver ‘hit’ songs for the group. Kirshner enlisted songwriters like Carole King & Gerry Goffin, Neil Sedaka, Neil Diamond, Boyce & Hart and Harry Nilsson to provide the hit songs but one of the Monkees, Mike Nesmith, wrote several as well.  The show was a huge hit.  On the records, the ‘band’ didn’t play instruments as, except for Nesmith, they really couldn’t play.  But, based on the success of the show, the band went on tour after months of rehearsals.  I just read that the Monkee’s reunion tour is in full swing (minus Nesmith whose mother btw discovered Liquid Paper).  Kirshner died this April. The Monkees apparently live on.  I wonder what the make-up of the audience is at these shows?  Pop culture...amazing!

In 1987, shortly after Al Gore invented the Internet, Ted Kraus launched  Dealmakers.net, which hosted the first and still operating free real estate forums where retail real estate dealmakers communicate about, what else, deals.  Peter Pike who launched a website sometime in the mid 1990’s was also, to use a real estate related term, a ground-breaker with his commentary and efforts to build an interactive community.  But, try as he might, Peter was never really able to engage our industry in dialogue.  BTW, Ted also wrote a column called, “My Way” a few of which are posted here.  Ted was an outspoken expert on the shopping center industry and anything else you might ask him.  You will both get a kick out of these blogs and also learn about some history of the shopping center industry.  After being introduced by a mutual industry friend, Larry Pinilis, and meeting for breakfast one Saturday morning at the diner on the Somerville Circle in New Jersey, Ted and I became friends for the rest of his life.  Actually, we almost went into business together but that’s a story for another time.  I miss him as does the industry.  He was a one of a kind guy.

But, the reason I brought all this up, relates to my own experience with this column, especially in the past ten days or so.  In that time, as many of you know, I started a LinkedIn group for OTR (thank you to all who have joined) as I believed that my ‘normal’ method of delivering this to you was ‘broken.’  So I reached out to some of my smart, younger, friends asking for advice and got some excellent ideas.  The one which I’m struggling with a little is the idea that I try a little more to create a global, commercial real estate online community.  To get people engaged in posting comments about something I write or a question I pose on a real estate related subject.   I’ve always like the ‘community’ concept although I understand that it is now a passé concept, at least in terminology if not in actuality.  But, to me, and I think to those of you who have written to me over the years, what makes OTR different is the personal connection that we have with each other.  As I sit at a desk in my hotel room at 4:44 on Tuesday morning I can tell you that hearing from you, whether it be a comment or criticism or a heartfelt note about something I wrote that struck a nerve with you, has been one of the most meaningful and important experiences in my entire life.  So, I’m a little afraid to mess with it.  But, if using LinkedIn (which I still have not really spent much time with), is a tool that you guys think could be used for ‘public’ dialogue on subjects, let’s try it.  If you have any thoughts, please write me, as always, here.  Thanks.

At the suggestion of my brother, this week I watched both Parts I and II of “No Direction Home” a wonderful biopic, I guess you’d call it, of Bob Dylan, directed by Martin Scorsese. Dylan is interviewed throughout the movie and two of his comments struck me:  “You’re constantly in a constant state of becoming and as long as you stay in that realm, you’ll sort of be all right” and “You can’t be wise and in love at the same time.”

Congratulations to a friend (and former neighbor):  Bob Lieb and his partner, Michael Seeve of Mountain Development Corp. in New Jersey who were honored last week at a luncheon sponsored by The American Conference on Diversity (formerly the National Conference of Christians and Jews) which holds an annual real estate industry event.

Thanks to all of you who signed up for the OTR Linkedin Group and to those of you who wrote me very nice notes. I apologize in advance if you get deliver of this column from more than one source-I'm still trying to figure the whole thing out.
Happy birthday Sean Felix....2 today! 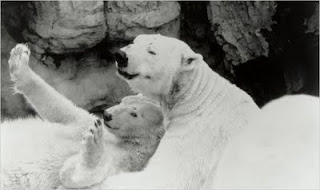 Photo:  Gus (right) and his longtime companion, Ida at the Central Park Zoo (2002)

These are my views and not that of my employer.
Posted by Steve Felix at 4:27 AM No comments: