The long and winding road... 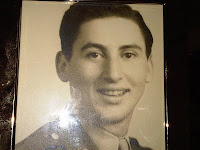 Manney Felix is the last surviving sibling out of a family of seven. He is also my Dad. The family grew up extremely poor and moved around the Lower East Side of Manhattan and in Brooklyn. Stories are told of the mother, Lena (the father was sort of absent) picking up and moving whenever the landlord was ready to throw them out due to lack of payment of rent. There’s one story of her leaning out her kitchen window and pouring hot water (I hesitate to say boiling water) on one landlord coming up the fire escape to evict them.

My father, now 92 and a half as he’s quick to remind everyone, is fading. I got a call last Saturday, just a few hours after finishing up my cross-country drive, that he had had a mild heart attack and was in the hospital. I took a flight and got to Florida late last Saturday night. My brother flew in from Tucson on Sunday and we’ve both been here all week and watched our Dad deteriorate.

"Manney the Felix", as he is sometime known, is a tough, stoic WW II veteran who just doesn’t complain (except to his wife, Eleanor, if he doesn’t get his bananas and sour cream for lunch). And, up until 1990, he really didn’t talk much about his life. But then he seemed, okay with answering questions about his youth and his war experiences and when I interviewed him and his sister Phyllis (Fanny) who was second youngest, it seemed like they grew up in different households as their recollections were just so, well, different. Since then, he’s even allowed my cousin Jeffery to cross-examine him from time to time about the family as the brothers (Harry, Barney, Sammy, Danny, Manney) really didn’t talk much (to themselves or anyone else) and especially about anything important. So, we’ve learned a lot from my Dad about his take, as the youngest, on family life growing up poor in New York in the early 20th Century.

But then there’s my take, and that of my brothers’, on growing up with our father and especially during this past week, Jay and I have had time to talk about a lot of things going back in history and also thinking forward in time. But my Dad is hanging on and at certain times, when he’s lucid and seems to understand what we’re saying, he’s still able to grab some of his old ‘humor’ from somewhere, even if it’s just a facial expression or an ‘ugggh’ when Jay or I say something dumb (which in Jay's case is fairly frequently), just to try to entertain him or at least distract him from what he may be thinking about.

This is a different experience from when my mother died in 1992 of aggressive brain cancer but what I’m learning is that as dementia sets in, there are some common characteristics that one can observe. Yes, this is a very difficult time, one which I know that a lot of you have also experienced; but, my Dad has had a good life and has lived to see his great grandson, for now albeit using that magical technology Skype, but he knows that Sean is in the world and we know he’s thrilled about that-when you think about it, how many of us actually get to be a great-grandparent? It’s a pretty special thing I think?

So, I’m writing this to you, early on Friday morning because in a little while, Jay and I will go join Eleanor at the hospice where my Dad was moved to yesterday (Eleanor has been sleeping in the hospital and now in the hospice). After observing him for a week, the doctors have told us that there’s not much they can do for him medically and that this is a time to have him feel the most comfortable and enjoy his remaining time. Of course, no one knows how much time is left but it appears that each day, in some way, the end of his life is creeping closer.

He knows that we’re here and he can’t figure out what we’re doing here (Jay and I have told him that we decided to take a vacation and visit him but we're not sure he's buying that one). But he’s also not complaining and we’re not really sure how much he can process about his situation or his condition but we think he probably knows something is going on and it's not good stuff. And, like a lot of things, this experience gets me thinking, about life, about death and about quality of life. How do I want to spend my years? I’ve been introspective about that for quite a while now and this is another reminder that life is short, even if we live to be 100 and that tomorrow is never a certainty and "life is very short and there's no time for fussing and fighting my friends."


But, I am certain about one thing: I am fortunate to have had my father around for this long and through the years to have our relationship continue to evolve and grow. He is fortunate to have found Eleanor (although sometimes she’s not so sure :-) to share his life with for the past 27 years and if it weren’t for her, he would not have lasted this long nor enjoyed the quality of life that she has provided for him. My brother and I talked about this yesterday: sometimes we catch ourselves sounding like our Dad or saying something he would say and as much as we love him, we don’t necessarily want to be or act like him in certain ways. Maybe that’s the way it is with us all, that in different ways, we want to be different from our parents or in some ways the same but it takes time to be objective about your Mom and Dad, just as it takes time to be objective about yourself. My Dad knows who he is and who he’s been. He served our country in WWII having been part of the flood of young men who were motivated to enlist shortly after the attack on Pearl Harbor. He always worked hard to provide for his family and he always had integrity and pride, even during some of the darker days of his career and life. He was the one to introduce me to the real estate industry when, playing rock and roll for a living, he said one day, "Why don't you get your real estate license? It couldn't hurt." He was a professional property manager (which is why I knew I never wanted to be one) who, in his last position as the general manager of a very large, multi-building, hi-rise codo project in Hallendale, Florida, survived for more than ten years in a politically charged environment where the typical manager lasts only two. And, even now, he has pride. Even now he maintains his integrity. And in his own words, even now he’s a ‘pain in the ass.’

On the long and winding road….

Posted by Steve Felix at 4:04 AM No comments: