IMN, RCA and Rock and Roll

I've been in New York this week and will be here until next Friday. Other than the terrible news about losing our friend Deb to Glioblastoma on Monday it's been another good week. It included a consulting gig with a new client and attending and moderating a panel at IMN's Opportunity & Private Fund Real Estate Investment Forum. My estimate is that about 900 commercial real estate professionals, from all walks, were at the IMN event. Also, yesterday morning, I attended the Asset Managers Roundtable which has been hosted for the past eight years by my great and good friend, Ed LaGrassa.  Some things I heard as I roamed around this week that I want to share with you:

At the Asset Management Roundtable yesterday I was reminded how great it is to listen to real estate people talk about a deal they've done. The good ones of course!  They know all the details and want to share the adventure of what twists and turns it took from the start to the finish. Those of us who have been dealmakers can totally relate to it. They're our war stories and today, with the capital stack so complex and convoluted, some of the stories I've heard make me just shake my head.  But I guess, in the end, it's all worth it.
RCA (Real Capital Analytics) had their first rooftop party of the season last night and it was a perfectly beautiful evening with moderate temperatures, low humidity and a peaceful, easy breeze.  I got to spend time with my old Internet-era buddy, Michael Stewart and his partner, Neville Teagarden of Lucid Holdings who are involved in some very, very cool stuff, as their website states, "Leveraging the Power of Casual Learning AI (Artificial Intelligence)."  What they've developed will be a true game-changer in our industry.

Solutions by Steve Felix update:  Each of my consulting clients has asked me to help them in different ways.  Generally, I'm hired by the CEO.  This week's client story:  Investment Management firm.  Has been investing in apartments for 20 years.  Their CFO is changing jobs and taking the role of marketing and raising new institutional capital.  While he's been involved in 'pitches' before, until now that had not been his primary job.  Basically, I've become his coach.  Getting him ready to go on the road to call on pension funds, endowments, foundations and consultants.  They have a long and successful track record, their stable of institutional investors has been a small but loyal group.  Those of us that have been in the marketing/capital raising role can appreciate that one of the things you have to prepare yourself for is rejection, on a regular basis.  But it's part of the game.  So we worked on developing a logical process to setting up meetings, how to most effectively tell their story, how to respond to certain questions and what you need to do to break in with the consulting community, among other things.


I've also had a breakthrough in my own new business development:  my eight current clients have all known me so there was a basis of trust established long ago.  The hiring of me came as a result of each of those firms determining that there was something I could help them with that would add value.  But last week I got hired by the first firm that didn't previously know me.  They had heard me speak recently at an industry event and something caught their fancy.  They checked me out and then reached out to introduce themselves. We scheduled an exploratory phone call during which they explained to me where they are now and where they'd like to be.  I told them I could help them and sent them an agenda for a day-long consulting session.  They asked me for two references. They reached one quickly and came back to me and said, "Let's do it."  So that felt pretty good to me and I'm meeting with their senior team next week.


I got an email last week from the real estate investment person at a college endowment:  "I have noticed  that many real managers are not on point with their fee structure. I have seen two offerings in the past week that charge 1.75% management fee, 8% pref, 20% incentive up to 12% net return then 50% carry after 12%. Expected return is stated at 12% net. From an LP's perspective that is very rich in any market. I politely declined meeting with them. If this was a one off, I would just think that the one fund just was off, but I see it in too many funds. Is this an industry thing, or are the present offerings just way off base?"  I gave him my opinion.  Do you guys have any thoughts you'd like to share?


Some very interesting stuff from an interview I read with Kyle Zimmer, president, chief executive and co-founder of the nonprofit, First Book, which provides books for children in need:


Q. Let’s talk about hiring. What questions do you ask?
A. I’ll say, “Have you ever started anything? From the time you were little, did you invent anything? An organization? Did you start a club?” Then I’ll ask, “What was the hardest part of that? What about failure? Talk to me about failure.” I think that is really important, because if you’re pushing, you’re going to fail. If you’re pushing in whatever you’re doing, you’re going to fail way more than you succeed. It’s that old saying: “You can fail without ever succeeding, but you can’t succeed without ever failing.”  The culture we live in teaches us to fear failure, and I think that’s a huge mistake. When I look back over the history of our organization, the times we’ve been most creative were a result of the pressure of a failure or near failure.  So I’ll have people talk about that, and see if, in their narrative, they blame other people. Or do they have some degree of humility in what they maybe should have anticipated and didn’t? And what they would do differently? We try to detoxify that at First Book.  Occasionally, we give out a Brick Wall Award for an idea that should have gone really well, but ended up crashing into a brick wall. It’s a way of saying, “It’s O.K., you did the thinking, and you gave it your best shot, and it crashed, but it was an honorable step.”


Q. What else?
A. I think that somebody with a sense of humor is really important, both directed at themselves and others. So I have an anti-bump policy. We don’t hire people who don’t have a spark. If they seem like they’re just a bump in the road, they’re not going to do well.


Show this one to your son or daughter who is taking piano lessons.


Music news:  Our new album, "Felix...Wait for Me", is now available on iTunes and I'm starting to get emails from people telling me what their favorite tune is.  We're pumped about this and hope you'll take some time to at least listen, perhaps buy a song or two, and spread the word.  Thanks a lot.


On the road...
June 4-8:  New York for client meetings and to attend and moderate a panel at the ULI Capital Markets conference on June 6 & 7.  I believe you can still register for it.
June 25-29:  New York for client meetings
Sept. 10-12:  Paris to attend the GRI Europe Conference.
Oct. 14-16:  Houston to conduct a training class on improving presentation skills.
Oct. 22-24:  Los Angeles to attend the PREA conference.
Nov. 7:  Washington, DC to speak with a student group from Johns Hopkins University on careers in real estate.
Nov. 8 & 9:  New York to attend the PERE Forum.

We lost our dear friend Deb to Glioblastoma on Monday.  She outlived the doctors' original prognosis by many months but we all knew all along that there is no hope of surviving this most aggressive of brain tumors known to man.  Even knowing that, the news was devastating and just so, so terribly sad.  Deb and I first met in summer camp when we were teenagers.  She was my brother Jay's first girlfriend.  We were out of contact for many years until a camp reunion in 2003 brought us all together again.  Coming from here adopted home in Guatemala she assembled us in a circle and gave out friendship bracelets that had been made by natives in that country.  Those of us who were there will always remember that special ceremony.  That bracelet remained on my wrist for almost a full year before it simply wore out.  It was at that reunion that Deb and my wife met and became instant friends.  A few years later, when Deb was in a soul-searching period her life (aren't we all from time to time?), they went on a Thelma & Louise road trip in the southwestern U.S.  The stories and photos of that trip are fantastic (even though I'm sure there are some adventures that they'd always kept between themselves!).  Some years back, Deb lived with us for a few months and at one point moved to Geneva where her writing talent landed her a great job with Rolex.  She had rediscovered herself and created a new life there.  Deb was a also a breast cancer survivor. She loved music.  She loved life.  She never said a bad thing about anyone.  She was 59. 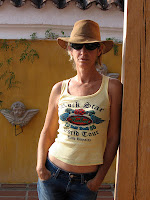 Posted by Steve Felix at 1:15 AM No comments: