The coincidence of the moment


A question often asked by consultants and others is “What’s keeping you up at night?” In my case, it’s “What woke me up so early this morning?”  Let’s see. Could it be the end of another year approaching so quickly?  Did I have an early morning global conference all that I forgot about?  Do I have enough carrots to feed the horse across the street?  Why did I eat that whole pizza last night?  The coffee I had at 2pm yesterday?  When will things get better?  Why do so many people watch these ridicuolus reality shows?  How come I’m not getting my phone calls and emails returned?   I think, for most if not all of us, this kind of list is much, much longer.  It reminds me about the first line of a song I wrote years ago, “Some days, I think I think too much.”  But this morning I tried all the tricks I know to get back to sleep, without success and so I just gave in, got up and am writing this to you all.
There’s a lot of stress in the world and in our lives.  This week I watched the family across the street from me moving out of their home.  One of their children has some form of mental illness.  I watched as she was led out to the family van; she was hysterical; crying, screaming.  Horribly sad.  She didn’t want to move.  Her house sold in August, 2001 for $285,000.  Her family bought it in July 2005 for $700,000.  While the documents haven’t been recorded yet, it’s likely that they sold it for a little more than $400,000.   Moving has an effect on all of us.  My youngest brother is mentally retarded.  If he is taken out of his routine it is upsetting to him.  My neighbor’s daughter was being taken out of the routine she’s had for five years.  She wasn’t able to control herself.  It was heart-wrenching for me to watch from my window.
In some ways, we are all creatures of habit.  Whether it’s getting up every day around the same time, going to the gym, eating the same breakfast, having the same coffee (or exotic coffee-based drink) bought at the place where everybody knows your name, taking the same bus or train to work, the list goes on.  But those of us without serious emotional problems can cope, for the most part, with these disturbances.  We understand why things are happening or why things have to be the way they are.  But even then, things changing are upsetting at the least even to those of us who are emotionally stable, stalwart and strong.  For this kid, it was like her life ending and she didn’t know what was on the other side of the rainbow.

In the real estate world, things are just happening at a much, much slower pace than we had gotten used to in the past.  Well friends, I think we better get used to this for the forseeable future. There is fierce competition for certain ‘core’ assets, driving prices up, cap rates down and when those transactions close the winners wondering if they really won or not.  Institutional investors are also sounding like they’re willing to go up the risk spectrum to value-add type deals but pushing them over the line into the opportunistic world is a little harder.  Having said that, there are some really big opportunity funds that have been raised this year and their challenge is to find the opportunity to invest in.  RCA reported this week that the "gains in investment activity have been uneven....Cross-border investors and non-traded REITs have been more focused in their investment activity....Clear differences are emerging in pricing trends....access to credit will also be a leading factor in determining market trends and pricing." Like I said, it’s not your father’s real estate investment world anymore.  That went bye-bye with the Oldsmobile.  Like it or not, we have entered a new era.  We have to learn to adapt. Yesterday, someone used the phrase, “patient money.” It was the first time I’d heard it in a while.  But to me, it’s not just the money that needs to be patient, it’s all of us as things are just not going to move as fast as we would like them to.  We’re going to have to invest more time, more money, more creativity, more discipline in growing all of our businesses.  We're going to have to invest more patience! The days of wine and roses (except here in the Napa Valley) are gone.  In my opinion, it could be decades (if ever) before we see a market like the one that we came through. And, as look-back books written in 2030 may suggest, what we’re going through is a good thing. It’s just that we’re too close to the situation to know that it’s good for us.   Like a lot of things in life, perspective is everything.
I had written a much longer intro to this section but I'll spare you the details.  This past week, in the New York Times Op-Ed section, there is a great piece, “Where Anonymity Breeds Contempt”.  It’s not a short piece but I think it’s worthwhile reading as it hits right at the heart of a bad trend in our society and suggest some solutions.  Personally, I think that no one should be allowed to post anything, anywhere anonymously. Just look at some of the horrible things that have happened, especially recently, where the Internet was used in destructive ways and is being held responsible for the suicides of several young people.  We’re on the road to nowhere, people and the destination is not one we’re going to like getting to. As the Mahatma said, "We must be the change we wish to see in the world".
On the road....
Dec. 6 & 7:  Frankfurt, Germany to attend the PERE Forum-Europe and moderate a panel.
Dec. 8:  Frankfurt, Germany to attend INREV’s Investor Platform and Committee Meetings
Dec. 13-21:  New York  (On Dec. 20 a bunch of us are going to meet at Pera Brasserie, Madison between 41 and 42 for the “The second almost-annual end of year buy your own drink thing.”  If you’re around please stop by starting at 6:30pm)
Dec. 16:  Boston
Jan.12-14:  Laguna Beach, CA to attend IMN’s Eighth Annual Winter Forum on Real Estate Opportunity & Private Fund Investing.
Jan. 24-28:  New York
Feb. 1-3:  Laguna Nigel to attend IREI’s Fifth Annual VIP Conference 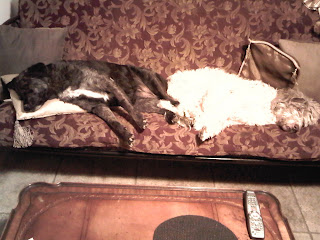 Photo: Life is tough!
These are my views and not that of my employer.
Posted by Steve Felix at 4:03 AM No comments: