Next week is the first anniversary of the death of my father.  As many of you told me, this post-death period of mourning or missing or whatever is not easy and takes a different amount of time for each of us.  As I used to speak with him almost every Saturday, it’s on Saturday mornings that I think of him most often.  But in the past few days I’ve also been thinking about my mother who died at 68 in 1992.  I was not an easy child.  I’m not even sure that I’ve been an easy adult (probably not).  My parents never attended “Parenting 101” and so they just did their best.  I don’t think they knew what to do with me.  They did their best.  I certainly didn’t know what to do with myself and after living an oblivious life for many, many years, I finally woke up.  I do my best.  I try to avoid regrets.  There’s nothing we can do about them other than use them to do things differently in the future.  But this week I again allowed a regret surface; this one of throwing out, without reading, a letter that my mother wrote to me and mailed to me at the basement apartment I was living in in Sea Bright, NJ after getting separated from my first wife and sons.  I had been angry with her for a long time.  I had been trying to accept her as she was (with the help of a counselor) and I was getting there.  I have wondered, all these years, what she wrote to me.  I will always wonder.  She was not easy either and I have a feeling I was handed many of her genes and behavior.  She was driven and became a successful travel agent (an industry she tried to get me into and I’m really glad, for a number of reasons, that I stayed with real estate-my Dad’s career as a property manager).  And now, as I think about how much I miss my father, I also think about how much I miss my mother and that I wish we had gotten to be friends before time ran out for us.

I found this piece by Charles "Ed" Haldeman, Jr., CEO of Freddie Mac on leadership (I'd be happy to send you the whole piece; just email me (steve@simplicate.com):


Creating a Template
Haldeman applies the same management principles to any company he joins. "The first day you come in," he said, "you literally don't know one person. You've got to have a template ... some philosophy to bring" that can be applied to an organization and the culture that already exists. Haldeman said his ideal management model has eight necessary ingredients:

These all sound like good things to do but as I think you’ll agree with me, like most good intentioned things, there’s a difference between ‘talking the talk’ and ‘walking the walk.’  I’ve been fortunate to work in a number of very collaborative, positive, learning environments  I’ve also been places where the politics, insecurity and fear overshadow the behavior that breeds success.  Just as the former are energizing environments, the latter are very draining.  I’ve never been a shrewd guy.  I’m pretty simple, not calculating, not political...just very open.  I know that some people feel threatened by my openness and that it has worked to my disadvantage a few times in my career.  Those that survive successfully, particularly in large organizations, have learned how to play the game.  And, I’m wondering as I write this whether that approach is what makes so many companies mediocre (i.e.  “Good to Great”).  Any thoughts?

On the road....
November:  Left coast
December 6-7: Mainhatten (not a typo) to moderate a panel at the PERE Forum-Europe
December 8:  Still in Mainhatten to attend the INREV Investor Platform/Committee meetings
December 16-21:  The City That Never Sleeps
February 1-2: Where my friend Michael K lives, CA to attend IREI's VIP conference
March 16-17: Capital City to attend the PREA spring conference
April 12-14: Fog City to attend The Pension Bridge Conference
SPECIAL ANNOUNCEMENT
(December 20):  The second almost-annual end of year buy your own drink thing.  A couple of years ago a bunch of us got together for a holiday drink and had a great time.  What I loved about it was that while I knew almost everybody, a lot of folks were meeting for the first time.  The invitee list will not be published but it's a very eclectic blend of commercial/institutional real estate people. In line with the conservative approach to entertainment expenses in the industry it's a 'buy your own' (although you can buy one for someone else, or me, if you want to!) event.  I've been encouraged by some previous attendees that we do it again.  So, here goes:

Thanks a lot and hope to see you there. 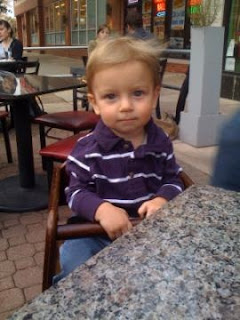 Sean Felix: 15 months chilling at The Sit Down in Hyde Park, Chicago

These are my views and not that of my employer.
Posted by Steve Felix at 11:43 AM No comments: