Brian Stoffers: A Giant of the Commercial Real Estate Industry - a friend who has made a difference!

Brian oversees the global Debt & Structured Finance practice at CBRE. Under his leadership, approximately 160 professionals have originated nearly $150 billion in loan volume since 2014.  Additionally, this practice maintains a loan services portfolio of more than $160 billion globally.

Prior to the CB Richard Ellis acquisition of L.J. Melody in 1996, Brian was Senior Vice President and Southwest Regional Manager for CB Commercial’s mortgage banking division.  Brian began his career with Coldwell Banker Commercial in 1981 and became a senior real estate finance officer in the firm’s La Jolla, California office.

On our phone interview, Brian and I were trying to remember when we met.  We concluded that it was many years ago and may have been via this column.  Then, as has happened a number of times with folks that I’ve ‘met’ through “On the Road”, we got together.  Over the years, Brian has written to me when something I write resonates with him.  It’s great to see someone with the integrity and professionalism that Brian possesses rise in the industry to a very senior position.  While he used to be amazed at my travel schedule, the shoe is now on the other foot as Brian has travelled lots of miles in his global role.

Q.  How did you get your start in commercial real estate?

A.  Let’s call it serendipity.  I started in the business in 1980.  I went to work for a small tenant rep broker – when I say small it was a one-man band in Orange County in So. California.  The guy found me at a lunch & learn at Cal State Fullerton.  I was pretty much working my way through college as a grocery clerk. He did a presentation and said, “Hey, I need some help but I can’t pay you anything” – that was my entre into the business.  Working for nothing for 6 months was table scratch but it turned out okay.

Anyway, I ended up with a buddy drinking beer with our dates at an international street festival in the City of Orange where I was born and raised.  My date that day my turned out to become my wife and we’ve now been married over 33 years.  My buddy and I decided that it was far better for us to drink beer that was brewed in Europe rather than Orange County so two weeks later we were off to Europe to drink beer for 10 weeks.  It was a soul-searching time for me and it was during that trip that I realized I loved the commercial real estate business but I wasn’t getting near the training or exposure that I needed.

When I came back, I embarked on a job search and it turned out that my mother, who was a secretary at a local high school, worked with another secretary, who happened to be a swimming teacher who taught me how to swim when I was five.  Her son was the managing director of what was then Coldwell Banker Commercial in Denver.  He hooked me up with Personnel Director Tom Townley in Los Angeles. (they used to call it Personnel back in the day, now they call it HR).   After a battery of 8-hours of tests, mostly psychological tests with questions like, “Would I rather pick flowers or saw wood” kind of thing, I had 6 interviews with Executive Vice Presidents at the company.  None of the EVP’s ever returned a phone call – that was part of the tenacity testing I was unaware of at the time. I got hired into a yearlong training program and become a “Wheelie”.  I was one of 11 invited into the program. My fellow Wheelies were all male, they were all white – that was the day.   I was one of just a few that were not ‘Trustafarians’ – most had ample trust funds supporting their $1,000 / month salaries.

We rotated assignments in different departments every three months.  My second assignment was in the corporate marketing department in downtown Los Angeles.  Funny story: I met a guy who was also in the program and we agreed to have lunch together. We got in his new Beemer, which was parked next to my un-air conditioned Honda sedan and went someplace for lunch.  He asked me where I lived and I said, “On my Mon’s sofa in Orange County.” I asked him where he lived and he had just purchased a home in Bel-Air. He was obviously a Trustafarian.

That training program was terrific.  The last 3 months my assignment was in the mortgage banking group in San Diego and that’s where I really found my passion and my niche. It required a combination of marketing and analytics - number crunching (I had been an accounting major at Cal State Fullerton).  They decided to hire me after that 3-month stint in San Diego and that was my real entre into the CRE business and the rest is history – 36 years later I'm still with CBRE.

Q.  What advice would you offer someone who has been in the commercial real estate industry a short time or a student looking for his or her start?

A.  I would put a number of ingredients into that bucket. Tenacity – don’t give up. Be persistent but polite.  Work hard at it. Be yourself – don’t be somebody who you’re not and follow your passion.

Q.  Looking back on your career is there anything you wish you had done differently and, if so, what?

A. I don’t have many regrets.  I had many forks in the road and in retrospect, having followed any one of those forks would have taken me in a direction that may not have ultimately turned out as well as the path I chose.  That’s part of happiness in life - not having regrets, not looking back and not trying to turn back the clock.  We can’t turn back the clock, we must move forward.  I had a blood disease that nearly derailed me for good – I could have been dead at 29 - and those experiences made me a better person long-term.  I believe that life changing events can be a blessing.

Q.  Who have been the greatest influences in your career and why?

A.  Wow.  Well if I start – there’s been a whole series of influencers over the years both internally, within the company and externally.  My grandfather was a great influence – a hard-working German who would handle a plow behind a horse or a tractor.  I learned a lot from him – I learned how to drink beer from him at age 10.  One at a time.  My grandfather was a self-made man, never graduated beyond 8th grade.  A hard-worker, honest as the day is long.  He was genuine and never had an enemy.  That taught me a lot.  I never heard him raise his voice. He personified a hard-working, ethical human being.  He was never a wealthy man but wealth did not measure his being.  He had people driving from LA to North San Diego County to buy his produce because they knew it was organic, unusual in the day, and he irrigated with water that never left his property.  They also raised beautiful fuchsias and other flowers.  He had a green thumb like nobody’s business and so did my grandmother. He had the best compost piles and he was an inventor.

One day I noticed this contraption that my grandmother had on the patio. I said, ‘Nana, what is that plastic bag hanging out of your ceiling?” “Oh, Grandpa made me a solar hair dryer.” He was just that kind of guy, always inventing – sort of a Rube Goldberg kind of guy.  Hard-working and solid.  He tragically died of prostate cancer that metastasized into bone cancer. He was a hearty, 5’10” and he died at 100 pounds of skin and bones.  But his mind was there until the very end…the very, very end.  I smile when I think about him.

In my real estate career, there have been a number of individuals who have meant a lot to me. Chris Ludeman has many characteristics that I respect greatly. Mike Lafitte has been a wonderful role model, personally and professionally.  Bob Sulentic leads by example and is a tireless and passionate CEO. Larry Melody, whose company we acquired in 1996, was a great influence.  Larry was iconic in the business, he taught me a lot.

I believe a successful human being is a compilation of not one but many characteristics found in those whose paths I’ve witnessed.  I’ve taken bits and pieces of elements lacking in my persona and have tried to learn from what I see in others. 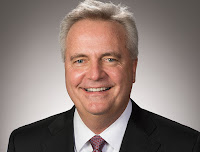